So far Douglas had seen his war mainly from the periphery, the sound of gunfire and shelling was more or less constant. Except for the odd incident that almost killed him it was mostly somewhat distant. The effects of war were all too evident with villages and houses badly damaged, trees and vegetation stripped bare and the landscape pockmarked with shell holes. Largely his unit had watched from the distance and treated more sick than wounded. Today however, was the day young Douglas really discovered the war first hand on his first visit to the trenches. His group, himself and fourteen men went forward to the advanced dressing station.

For the first time Douglas arrives in the trenches, they went via Windy Corner and through a long communication trench. He described the wooden boarded trench as “duck-boards” above the knee in water. Apart from shelling a Hun aeroplane that had “ventured up” the evening passed quite peacefully and his first taste of life in the trenches was uneventful.

Here, rather surprisingly perhaps, they ate a roast dinner that sounded as good as you are ever likely to get in a cold wet muddy ditch. Still Douglas didn’t complain and describes the menu in some detail.

“That night five of us, Captains Owen and Smally R.A.M.C.; Lieutenant’s Rt. Johnson and Nesbit and myself, sat down in our little sandbag dugout, to a Hogmanay feast. In spite of our proximity to the front line, we indulged in roast chicken, potatoes and peas; plum pudding and apricots; coffee; biscuits; sweets; cigars; champagne; vin rouge and cherry brandy”

At 11.55 pm he went outside into the crisp starry night, almost silent except for one lone rifle shot. Midnight, brought in the New Year and the men linked arms as they sang Auld Lang Syne, before they returned to the trench.

“At midnight we solemnly toasted the New Year, in the distance we could hear the cheers and the singing of Auld Lang Syne, I felt quite lonely and depressed, but not for long for all of a sudden one of our batteries let off a salvo which the Hun immediately replied to by sending over 11 shells 10 of which didn’t go off (didn’t explode!). In a few minutes all was quiet on the Western Front. I slept on a stretcher in a small dugout. I was very cosy inside my sleeping bag.” 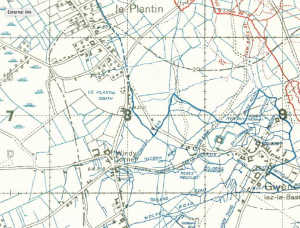