“On August 28th five of our aeroplanes flew over the Hun lines and dropped pamphlets telling the Huns that Rumania and Italy had declared war on them. On the same day I was caught in a Hun bombardment up Stirling Lane close to Dawson City. I lay low for a while and then decided to return to the canal bank! Brave lad! Our relief on the 28th was delayed as a report came in at 8.30pm that the Hun had remade part of his wire defence opposite Coffee Trench – the weak spot of our line. Everybody got the wind-up, and expected an attack, or a raid at least. We all stood-to, with gas masks at “the  alert”. Lewis guns were rushed forward and the Brigadier-General was chasing about all over the place seeing that the weak spots were guarded. Two patrols were sent out as soon as it was dark, and discovered a small gap in the Hun wire made by our shell-fire. Mr Bosche was busy repairing it! We had a good laugh when the patrols got back and gave us this report! But I didn’t get back to Trois Tours Chateau until midnight as a result!

Most of these gun-duels took place at night and one could get very little peaceful sleep for the terrific din. The whole ground shook.

One day I was having a stroll across the fields towards Essex Farm, when our guns began to bombard the German front line trenches. Of course, the enemy retaliated and sent over lots of “pip-squeaks” in the region of Essex Farm. One shell landed beside six men and wounded them all. One poor devil got both legs blown off. What a shambles!  I rushed as fast as my legs could carry me to their aid, and was nearly blown over by the explosion of a big “Crump” en route. Stretcher-bearers of the 129th Field Ambulance cleared five of the wounded in record time but I was left behind with a wounded sergeant in the middle of the road beside a grim pool of blood, a leg, (minus the body) and a stretcher. Luckily, an engineer chap noticed my predicament and speedily came to my aid. We heaved the sergeant, who was hit in the thigh on to the stretcher, but almost immediately had to roll him off it into the ditch by the roadside as some more Hun shells came on and burst uncomfortably close to us. However, we got him on to the stretcher again, but had some job getting him across country to the Dressing Station. He weighed close on 15 stone!

Another day we watched the enemy shell one of our batteries close to the Chateau. The gunners had a cow and it was comical to watch them evacuating the milk-producer from the danger-zone, when the shelling commenced. The silly brute wouldn’t budge, and had to be hauled and shoved by furious and “windy” gunners!”

“On 24th August, we went into the trenches, relieving the 14th Welsh. I had a good Aid-Post on the canal bank, close to Battalion Headquarters, and with good sleeping accommodation – nice bunks. The artillery liaison officer shared the dug-out with me. This was my abode for four days in fine weather, but not too hot.

There were lots of dead bodies – British, Canadian, Bosche – lying buried, not too deeply, in the banks of the canal, and the canal itself with very little water in it was stinking with decaying flesh. It was a ghastly spot. Both sides of the canal banks (facing away from the enemy) were honey-combed with dug-outs of all sorts and sizes. Some were wonderful concreted palaces and others just tiny sand-bagged funk holes. Well-kept duck-board tracks made communication easy between dug-outs, and numerous wooden bridges erected by the engineers, crossed the stinking canal. Rats abounded in millions – great, fat brutes, as big as cats. They slunk about at night pinching our food and ruining our clothes.

One night I awoke with a feeling of weight on my chest. On putting up my hand a rat ran over my face! I got a creepy scare that time! The brutes even ate our playing cards and candles. We organised hunts at nights, and killed them with heavy sticks and revolver shots. Even terriers were sent up to help us.

During the four days in the line, I went up the communication trenches each day and visited the companies in the front line. I also had sick-parades each day and inspected dug-outs and the latrines on the canal banks. Some of the dug-outs had to be sprayed out with Cresol solution as they were verminous.

We had several casualties, mainly due to Hun rifle-grenade fire.”

“At 10 o’clock on the evening of August 20th we stealthily left the camp and marched into Poperinghe where we entrained for Vlamertinghe. Our train was an armoured one with all lights out, and we rushed through the night at express speed. From Vlamertinghe we marched along a very much shell-holed road to our new abode “The Chateau des Trois Tours”, close to the shell-battered village of Brielen. My medical inspection room was in the stables adjoining the chateau, which was quite an imposing building, quite untouched by shell fire, strange to relate. It was rumoured that the building belonged to a German, hence its intact condition. Anyhow it was quite a comfortable billet for us with its big airy rooms, and large fireplaces, where we indulged in roaring fires when the chilly evenings arrived. Headquarters staff occupied the Chateau whilst the companies occupied shell-battered farm houses and cottages round about. One company was in good dug-outs on the Canal (Yser) Bank, about 2-3 miles across country from us, and nearer the enemy, of course.” 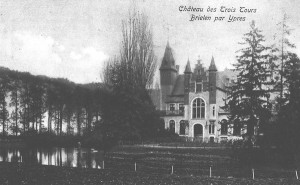 “On  August 6th, in brilliant sunny weather we moved about a mile forward into “L Camp”. It was rather crowded as the 15th, and 16th RWF (Royal Welsh Fusiliers) were in the same camp. I shared a tent with the Padre, and here we remained resting, refitting and recuperating after the Somme Battle until the 20th of the month. I had lots to do in training new stretcher-bearers, planning latrines, lecturing to the troops on health matters, inoculating officers and men against typhoid, etc. The weather was generally very hot and sunny and we soon got well  tanned.

In the evenings we usually went into “Pop” for dinner at “Skindles” and when we got back to camp had great rags – letting down tents on peacefully-sleeping occupants etc.

HM King George V passed by our camp on the 15th in a large car, but didn’t stop to inspect us. We gave him a great cheer.” 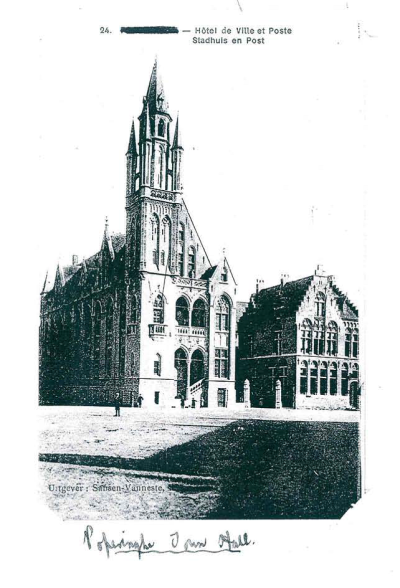 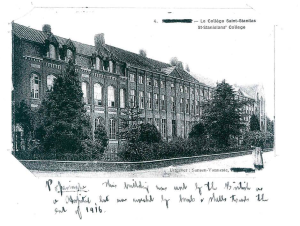 Poperinghe: this building was used by the British as a hospital, but was wrecked by bombs and shells towards the end of 1916

“We entrained at Doullens at 6.20pm and reached Poperinghe in Belgium at 1.30am on July 31st. It was a tedious journey. After detraining we marched about 8 miles out of Belgium into France to a little village named Houtkerque – a pretty little place, where I established a Medical Inspection Room in a deserted butcher’s shop.

Here we rested for a couple of days, and then trekked five miles to a hut encampment in a wood near Poperinghe – quite a pleasant spot. We had four days of rest here, but I was kept busy attending to the health of the troops – baths, foot inspection, inoculations etc, – and the camp sanitation.

Poperinghe – 4 miles distant – I visited one day. It was quite a large-sized town, but damaged a good deal by shell-fire. The shops weren’t very good. Dinner at “Skindles” was very good, however.

The Divisional Baths were very meagre, and were erected by the Guards Division. The Prince of Wales had a bath there only a week ago.”

Poperinghe as it was spelt during WW1 is now Poperinge, but in those terrible years it was called “The last stop before Hell”. Although Poperinghe was never in German hands it was occasionally subject to heavy German shelling, but represented a comparative safe haven to British and allied troops.  Today on Gasthuisstraat you can still see the building that during the Great War was a café or club, popular with officers called “Skindles”.

Skindles like so many places on the Western Front was an anglicised nickname given to a local place to make the men feel more at home. It was named after a famous hotel on the bank of the Thames in Maidenhead. To Douglas and his comrades it was to become a regular haunt. Meanwhile the rest of Poperinghe, provided many other places of essential respite like shops, restaurants, cafes or estiminets, cinemas and concert halls and not a few brothels. 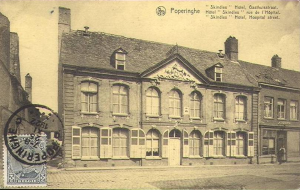 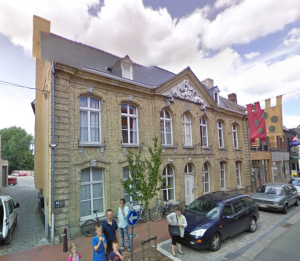 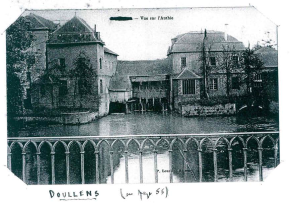 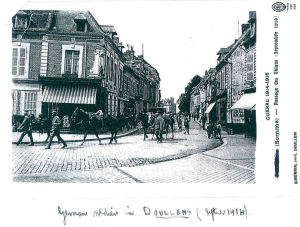