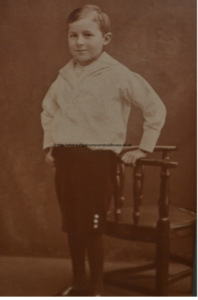 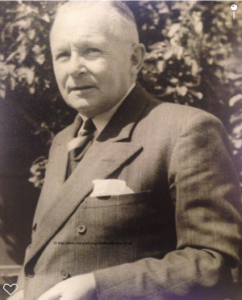 The diary that Douglas left us wasn’t merely a tale of war. Rather it was the story of a young newly qualified medic that through the accident of time was catapulted into the fastest and most thorough field training that God could have ever devised for a man. We learned that amongst the horror of war there was fine dining, dancing, laughter, weekends off and sightseeing. Douglas describes “wonderful” scenes of spectacular events. We learned about his laidback character that seemed to take the war in his stride. Though never firing a shot in four years of conflict, he laid his life open to the most extreme danger to help his comrades and country. He escaped death by a whisker on several occasions: almost blown to pieces by a shell at Richebourg in 1915; saw most of his unit wiped out at the Somme in 1916; survived the horror of Alouette Farm bunker in 1917; gassed while rescuing others in 1918 before finally surviving the Bolsheviks in 1919, he was miraculously spared to continue a lifetime of helping and tending to the sick of the communities he served.

For reasons that seem only to be that the war was the war and everything else was different, he never mentioned any hint of romance in his life. Never once did he talk of writing to a sweetheart. He never wrote of his hopes for the future. So, it must come as something of a surprise to the reader that so quickly after coming home for good he married the young girl he was to spend the rest of his life with. He mentions her only once in the diary when Elma accompanied her mother on the motor car trip whilst home on leave early in 1916. She was a young teenage girl then only 15 years old. 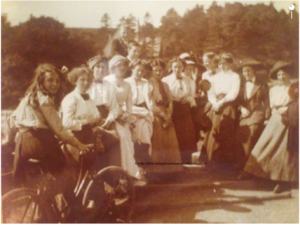 Elma circa 1915 on the bicycle 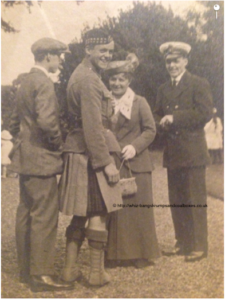 Left to Right Kenneth Croal K.I.A 1918 in Oborzerskaya, Russia. Then Elma’s family T.G.Gordon Sturrock K.I.A France 1916. Mrs Annie Sturrock, Elma’s mother and Douglas Sturrock RNVR her brother that was on the quayside at Leith.
Kenneth Croal was mentioned in the diary as having met Douglas for the first time on the City of Cairo on the way out to Archangel. He is also mentioned by General Ironside in his book “Archangel 1918-1919” (ISBN 847347-32-0)

On 1st November 1919, Captain Douglas Charles Murray Page RAMC MC married Elizabeth Mary (Elma) Sturrock at St. Cuthbert’s Parish Church in Edinburgh. Captain Page became Dr. Douglas Page MC and the young couple moved at first to Keswick in Cumbria where he acted as an assistant and then to Stowe in the Border lands of Scotland where he began his own general practice. Unfortunately, he felt that in Stowe they were too remote, cut off from the rest of the family. When Elma fell pregnant with daughter Ann, Douglas sent her to Edinburgh to be near her mother and her family. Ann was born in Edinburgh in November 1920. Son Gordon coming along in November 1923. 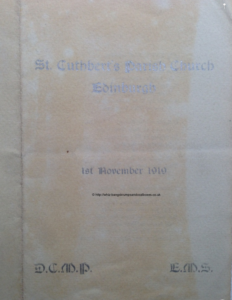 Cover of the wedding service 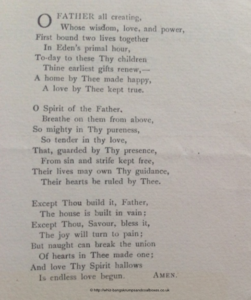 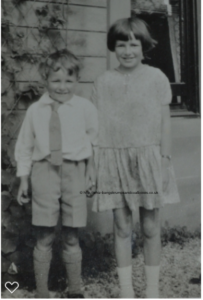 By about 1928 the family moved to the coastal town of Pittenweem in Fife where Douglas worked as a G.P. until his retirement in 1958.

1931 saw the first of a series of re-union dinners for the surviving members of the 130th (St John) Field Ambulance. On the 28th September 1935 it was reported in the Western Mail that it was the fifth such event that had taken place. Douglas was invited to attend along with Captain F.A. Anderson and just as in France, Colonel J.E.H. Davies D.S.O. controlled proceedings. It was held in Cardiff and organised by Bugler W.G. Thomas and Captain L.C. Cohen. The event was repeated in 1936 and probably continued for some time after.

Having done more than his fair share of defending his country Douglas wasn’t so involved in the Second World War, although didn’t escape it entirely. The Fife coast including the villages of Anstruther, Elie, Pittenweem and Crail were subjected to at least three terrifying opportunistic air raids by the Luftwaffe during 1940 and 1941.

By the time of his retirement he had become a respected and much-loved member of the community as well as a family man. He had helped establish the Pittenweem branch of the British Legion and was instrumental in setting up first aid training through them and of course presided over the concerts organised by them too. After becoming a vice-president he was unanimously voted President in 1957 only to announce his retirement in December of that year. Shocked at the pending loss of their beloved GP, a committee was formed and went into action to organise an official goodbye ceremony which was held in the large drawing room at Dr. and Mrs Page’s Murrayfield home and surgery. It was attended by the great and good of the area, much of the nursing staff and included the Earl and Countess of Crawford, a resident of Colinsburgh. Speeches were made and then a presentation of an inscribed clock and a cheque for the balance of the money raised. Douglas’s famed sense of humour wasn’t lost on the occasion when he let it be known that his new bungalow was situated quite close to the Glen o’Dee Sanitorium. 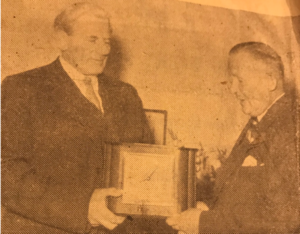 The 28th Earl of Crawford presents the clock

After retirement, Dr. and Mrs. Page bought a bungalow, which they also named Murrayfield in Banchory, Royal Deeside, Aberdeenshire to be near daughter Ann, who had married former Scotland ice hockey star Ronnie MacDonald and together had bought the Banchory Lodge hotel in Banchory.

Dr. Page continued to act as a locum to the local surgery in Banchory, filling in for sickness and holidays. He was also a keen bird watcher and as late as 1964 had posted an observation of waxwings in the journal of the Scottish Ornithologists Club “Scottish Birds”. 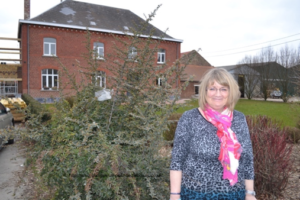 It is thanks to Douglas’s son Gordon Page that we were able to have a copy of the diary. He sent the photocopy in two volumes from Canada to his niece Elizabeth in West Sussex, Di’s grandaughter, arriving through the post like two large telephone directories. The centenary of the events seemed a fitting time to add to the many memorial events taking place throughout the world to remember that dark and ultimately pointless conflict one hundred years ago.

Thanks must go to Dr. Brian Page and his wife Joanne in Calgary for supplying better copies of the diary photographs, a time consuming task. To Liz Coggin for her patience in letting me do this. To Dmitry Bychikhin for his information about Archangel. To all those people that have answered questions, asked questions and have participated in any way.

The biggest thank you must go to Joanna Moncrieff, my worthy assistant in producing this work, it has been a remarkable tale of learning. Joanna has dedicated four years of her life to the project with the utmost enthusiasm.

We have learned so much. The research has been an enjoyable process and Joanna has learned how to edit and produce the online content. Her expertise in legal matters has hopefully kept us within copyright laws. On many occasions she changed copy or advised me not to use things without permissions etc. Hopefully we managed that, if we made any mistakes we will always correct or remove them if need be. 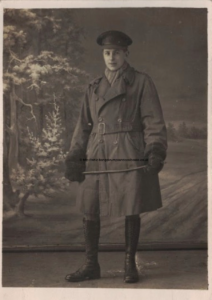