“I saw the New Year in at Perth Cross. A huge crowd mainly of young lads and girls collected towards midnight, and made a great din letting off crackers and bombs, and shouting and singing. When I got back to Hospital I joined the nurses at the New Year Feast which consisted mainly of trifles, fruit, cakes, tea and champagne!”

Douglas tells us he saw the New Year in at the Perth Cross. The scene today is one that having been altered in the most uninspiring way, was set to be lost entirely as the City Hall had been voted by the council to be demolished. Fortunately, further interventions have apparently seen the salvation of the building. Schemes, initially approved by Perth and Kinross Council in 2014 which would have seen it turned into a hotel seem to have come to nothing. The latest news as of September 2016 was that it was now approved to be reinvented as a Visual Arts Centre, forming part of the new Perth City Plan. 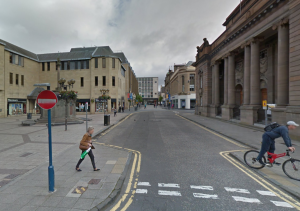 “On the 28th Lady Kinnard entertained the wounded men to tea and a concert in the Masonic Hall. I escorted Matron to the show. It was a terrific rabble. After the concert the guests took to dancing. It was worse than St Andrews on Fair Day!” 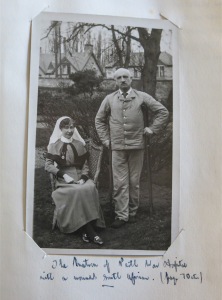 The Matron of Perth War Hospital with a wounded South African. The patient is wearing the light blue uniform as issued to men that had received war wounds.

Lady Kinnard referred to in the diary, I believe to be a typo and the lady referred to was in fact Mary Alma Victoria (Agnew) Kinnaird, the wife of Arthur Fitzgerald Kinnaird the 11th Lord Kinnaird.

Although born in London his family were wealthy bankers from the Perthshire area and he became the chairman of Barclays Bank. The 11th Lord was also a great sportsman and footballer renowned for his tough tackling. He won a singular cap for Scotland against England and played against Chingford’s very own Mr Charles Alcock in the second FA Cup final of 1873. He holds the record for the amount of FA Cup final appearances making nine in total.

Both Lord and Lady Kinnaird died within 11 days of each other at their home at 10 St James’s Square (now Chatham House), London in 1923. 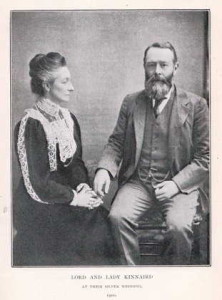 Lord and Lady Kinnaird in 1900

“Christmas was a great day in hospital. I woke up with my bed etc decorated with holly – the work of the nurses! The patients had a great feed in the beautifully decorated dining hall at noon, and I dined with the staff at 1.30pm. Afterwards I had a sing-song with the men in the Hall, and then a huge tea – in fact I had five teas that day – one with the men, one with the nurses on A Floor, another on B Floor, another on C Floor, and the last with the Matron. At night we had a whist drive in the Hall, followed by a dance till midnight. A huge success.”

“It was a decided nuisance especially as I had to repack all my goods after shifting from the Royal Hotel into ‘digs’ near the barracks. Major Paton a Perth medical practitioner, was my superior officer at the War Hospital. He didn’t live in, but I did, and was very comfortable in a cosy bed-sittingroom. The hospital was well equipped and staffed with trained sisters and V.A.D. nurses*. There were 75 patients in the place, but my work was never very heavy.”

Voluntary Aid Detachment nurses (VADs) were established by the War Office before World War One to help out in military hospitals and usually consisted of women from well-to-do dispositions. You can read more about them in this post from the Museum of the Order of St John.

“Next day I took over from a Captain Mede at the hospital which contained 33 beds – two wards and a scabies isolation block. After getting into the swing of things I was transferred to the war hospital in the Poor House on the 19th.”

“At noon on 16th December, I got orders to proceed “forthwith” to Perth for duty at the military hospital there. I arrived in the Fair City at 6.30pm and proceeded in a Growler to the Military Hospital when I reported for duty and then went along to the Royal Hotel where I stayed overnight.”

“Needless to say, the next fortnight was very pleasantly spent. I found all well at home and enjoyed the change of food and the comfort of clean, cool sheets and open fires again. I paid visits to many friends, and also to the Infirmary where I watched operations, and attended clinics, and my old school Watson’s, where I got a great reception.

On December 5th I reported at Scottish Command Headquarters. I was sent to the Castle, and saw the senior medical officer there – Col. Perry – who handed me over to a Major Wilson for duty in the Board Room. Here we medically examined men up for commissions and disabled soldiers for pensions. The work was not heavy but was confining. Then I got the job often of visiting sick soldiers on leave at their homes. This was better for I was able to get out for a walk. Every third night I had to go on night duty at the small hospital in the Castle. I never got any work to do and was made very comfortable.”