Back to the 130th and a comfy billet

“I was relieved on the 18th, and went back to the 130th Field Ambulance at L’Estrade. I found them all comfortably situated in a big farm-house. Captain Burke and I shared an Armstrong Hut, and were very comfy.”

There were various developments of the Armstrong Hut. It was a hut usually constructed of wood. They could also have canvas sides and/or corrugated steel sides and roofing. 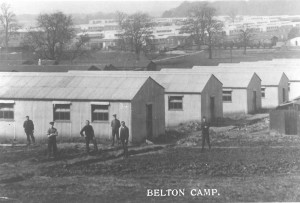 “On the 13th February we left in motor buses for Erquinghem and got a great send-off from the inhabitants of Estaires. At night we went into the trenches at Desalanque Farm relieving one of the King’s Own Liverpool Battalions of the 57th Division. Rather a distressing accident happened in ‘C’ Company next day. A boy of 19 was cleaning his officer’s revolver, when it went off hitting another man in the head and killing him.”

Douglas was no stranger to Desalanque Farm having been there with the 13th RWF from September ‘17 and now finds himself back with the 17th RWF.

Before the outbreak of war in 1914, Londoners had witnessed the introduction of new motor buses. These replaced the London General Omnibus Company’s horse buses from 1910, the last one being withdrawn in 1911. In the next three years over 2500 motor buses had been introduced. During the Great War a total of 954 B type buses had been requisitioned for service on the Western Front from Flanders to the Somme, many being returned to service in London at the cessation of hostilities. 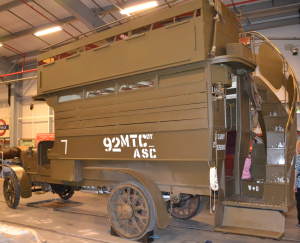 The Regimental diary of the 17th only refers to the men involved in the tragic accidental shooting as 1 other rank killed by 1 other rank, unfortunately no names being mentioned.

“On Feb 7th,  the ‘Dominoes’ Concert Party gave a great concert in the hall. It was a great success. The place was packed to overflowing, and many were turned away. There were a lot of officers, British nurses and French civilians and the audience was most appreciative – everything went off without a hitch, and all the gags went down well. Driver Croly was splendid at the piano, and the stage hands did well too.”

Driver Croly is credited at the bottom of the programme for composing some of the music for the concert. 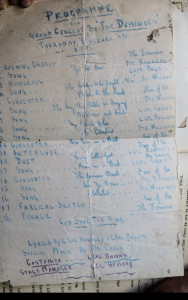 Here’s a link to view a contemporary period concert party. Please do not be distracted by the attractive ladies in the centre of the group as they are probably not quite what they seem. https://www.britishpathe.com/video/soldiers-concert-party