“I started work again on the 26th April under Major Louden at the casino on the sea-front which was connected with a huge hospital. I was put in charge of two wards, with over 40 patients in one, and about half that number in the other. Most of the cases were suffering from rheumatism and trench fever. All were medical cases. Four days later, I got 60 new cases into my wards. I was kept busy all morning, but was able to get the rest of the day mostly to myself, except when I was orderly officer.

Tea at ‘Topsy’s’ was the favourite afternoon jaunt, and at night dinner at the Hotel Normandie followed by a visit to the ‘Follies Bergeres’ was quite the thing to do!

The ‘Maison Blanch’ outside Havre was another good spot for dinner, and a Dr Simey and I used to walk out there often in the evening, and have a bite of food.”

“I wasn’t fit again until 26th April as I had a sharp attack and developed a nasty nasal catarrh afterwards which kept me back. I was extremely comfortable in hospital – well-fed and well cared for. I was allowed out of bed at the end of a week when my temperature settled. I had walks every day into town, and along the promenade with some of the other hospital patients. The weather was generally warm and sunny, so that we enjoyed these walks very much.

A favourite walk was down to the harbour where we watched the French aeroplanes leaving for, and arriving back from their patrols. Another good walk was along the top of the cliffs where one got a grand view of the open sea.”

Today in the 21st century it is the young, elderly and weak who are most at risk from dying from flu. In 1918 the year after Douglas contracted influenza a particularly aggressive strain of the disease was killing healthy young people. This outbreak became known as Spanish flu due to wartime censorship which neutral Spain wasn’t affected by. Their newspapers were free to report the reality giving the false impression that Spain was more severely affected than other regions particularly because of the severe illness contracted by the king Alfonso XIII. The Spanish called it the Naples Soldier. We should also remember that the disease that killed more people between 1918 and 1920 than the whole of World War One in modern times would have been largely controlled by cheap and widely available medicines such as paracetamol.

“The hospital ship “Lanfranc” was torpedoed off Havre on the 17th April. She had 400 German prisoners on board.  Next day some of her lifeboats and the bodies of several nurses were washed ashore at Havre.”

Douglas’s figure of 400 German prisoners seems to be inaccurate as reports following the sinking at 8pm on the 17th April speak of 167 wounded German prisoners, 234 wounded British soldiers, 52 medical staff and 123 crew.  The discrepancy in casualties is probably official propaganda. It would have been normal to exaggerate the figures of casualties to whip up anti-German sympathies.

Of the 576 persons onboard that evening only 34 lost their lives, 14 British wounded, 15 German wounded and 5 crew, the ship sank in just over 1 hour.

HMHS Lanfranc would have been flying the Red Cross flag and sporting green, red and white livery with a red cross on its sides as stipulated by the Hague Convention which was brought into effect in 1907. Hospital ships were required to pick up casualties of all nationalities and were supposed to be immune from attack. The fact that the ship was hit by a torpedo means that its sinking was intentional. In January 1917 the German Government had accused the Allies of using hospital ships to transport troops and medical supplies, adding that no Allied hospital ships would be tolerated within certain areas.

A pamphlet entitled “The War on Hospital Ships” published in 1917 from eyewitness accounts has more information about these terrible incidents including much about HMHS Lanfranc and SS Donegal which was lost on the same day.

An eyewitness account of the sinking from one of the British officers on board (page 13 on the above link) was published in the Daily Telegraph on 23 April 1917. That edition of the Telegraph will be available to view on the following link on 23 April 2017. http://www.telegraph.co.uk/news/ww1-archive/ 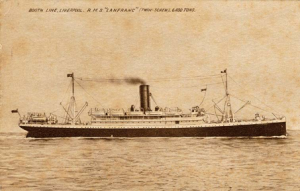