After immediately signing on again for another tour of duty, this time in Egypt, Douglas’s sojourn in Scotland came to an end. However, Egypt in the sun became an unfulfilled fantasy. The sun was swapped for more mud and rain as orders came to report back to the Western Front.

“On the 26th I was relieved by a Capt. MacDonald, and proceeded to France via London, Southampton and Havre. Whilst awaiting in the rest camp at Havre to be sent up to the Front, I developed influenza, and was carted off to the Officers’ Hospital in Havre. It was a most comfortable hospital in a large mansionhouse. Col Babington D.S.O., was in charge, and I was put into a nice sunny ward. Next bed to me was a Mr Merrylees – a Y.M.C.A. worker – from Paisley. He had a bad dose of bronchitis, and was glad to lie in bed, being an elderly man.” 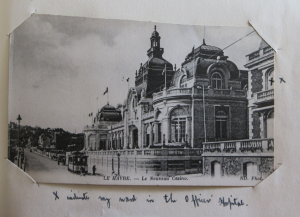 X indicates my ward in the Officers’ Hospital 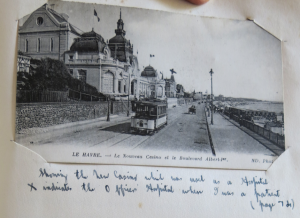 Showing the New Casino which was used as a hospital. X indicates the Officers’ Hospital where I was a patient

At the time, large hotels and buildings like schools and casinos were an obvious choice for wartime hospitals with their large rooms and large bright windows.

Today’s Le Havre leaves no trace of the Casino or the Officers’ hospital, the modern esplanade of Boulevard Albert has been totally modernised. 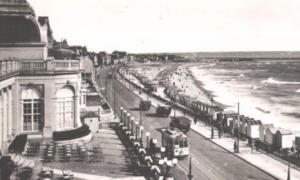 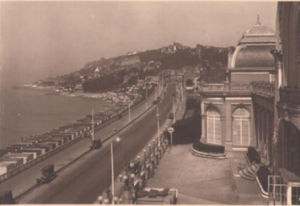 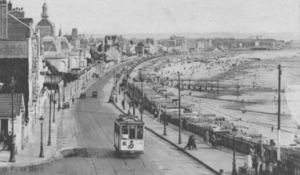 After being given a month’s leave to recuperate from the non-stop traumas and massive workloads encountered on the Western Front, Douglas of course was kept busy with lighter duties, but no time off. He was examined by General Culling (could this be Surgeon-General John Chislet Culling M.R.C.S., A.M.S., who as recently as January 5th 1917 had been made a Knight of Grace in the Order of St John of Jerusalem in England?) and a Captain Wilson.

“On March 13th I had another Medical Board at Edinburgh Castle, and was passed fit for general service (after my month’s rest!).  General Culling and Major Wilson boarded me.”

“I was then sent out to Glencorse Barracks where I relieved Captain Millar DSO MC. There I had to look after the Depot sick, and the small hospital for Veneral Diseases, as well as help with the medical examination of recruits. I lived and messed in the Depot. The mess room was a cosy place, and the regular officers dined at night in their full regimentals – Royal Scots, of course.  Capt. the Honourable R Balfour, was one of the Depot officers at that time, and Colonel Wemyss was C.O. I wasn’t overworked and got into Edinburgh by bus a good deal. Here are one or two notes I made about four of the Depot Officers:

Capt. Salmond: A great old chap – uncertain age. Very quiet, but gets very frisky when the Colonel isn’t about. Very conscientious and kind-hearted. A great punster, and fond of a joke.

Lieut. Darragh: a thin poor specimen. Age about 30. Talks about 30 to the dozen and without much sense. Smokes endless cigarettes, is a moral wreck, as well as a physical one.

Lieut. MacDougall: a heavy-weight with about ten double-chins. Said to possess about £12,000 per year. Brays a lot about his knowledge of Court gossip, but is quite harmless. Eats and drinks a lot. His chief hobby is ‘talking’ and he has a wonderful ‘gift of the gab’.

Lieut. Col. Wemyss: a little stout man with a face like a par-boiled lobster. Very fond of a  whisky and soda.  An old soldier. Not married but fond of the girls. A moody man, and likes to pull one’s leg.”

Douglas was posted to Glencorse Barracks. He tells us of fairly light duties and takes time to describe some of the incumbents there.

Known at the time as Greenlaw Military Prison, Glencorse Barracks at Penicuik were built in 1803. Expanded in 1813 to accommodate up to 6000 French Prisoners of War and the guards to mind them, but following the success of Wellington at Waterloo in 1815, effectively ending the war, the prisoners were returned to France. So the place was largely underused for the next sixty years. In 1875 it was converted to an infantry barracks at the enormous cost of about £30,000.

Over the years it has accumulated something of a dark history. In 1807 Ensign Hugh Maxwell was convicted of the culpable homicide of prisoner Charles Cottier and was given a nine month prison sentence. Much later in 1985, the horrific triple murder of three soldiers based at the barracks was carried out by a corporal following a wage robbery. Corporal Andrew Walker was convicted and given a life sentence with a recommendation he serve a minimum of 30 years reduced on appeal to 27 years. http://murderpedia.org/male.W/w/walker-andrew.htm

Walker suffered a stroke in 2009 and was released in 2011 about a year early on compassionate grounds.

Then in October 2016 Lance Corporal Trimaan Dhillon based at Glencorse was charged with the murder of Alice Ruggles at a flat in Gateshead. http://www.bbcmundo.com/news/uk-england-tyne-37666404