Fine Singing and Chopped off Fingers

“On Sunday March 30th I went to a concert in the Duma. It was given by a huge choir (Russian) of mixed voices, and was very excellent. There was no accompaniment of any sort. The sole tenor was in excellent form. The hall was crowded, and very hot.

During all these days I was kept busy in my wards. Wounded and sick men were continually being admitted, and my wards were always full. Sometimes I had to pack as many as 40 patients into one ward. Many cases of frost-bite came in for treatment. Some were very bad, necessitating amputation of toes, or fingers. Major Jamieson, our surgeon, was kept busy in the operating theatre. He appointed me his assistant, and occasionally I was given a minor operation to perform.” 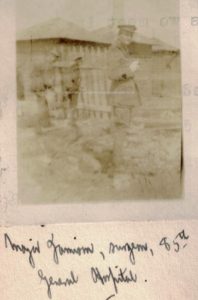 “Next day, another officer and myself, had our photographs taken by a Russian photographer in Archangel. The photographer looked like a prize-fighter, and demanded 75 roubles from each of us, before he would risk his camera on us! Major Baxter of the Medical Stores told me that we were all going home in June. I hope the news comes true. Notices were posted over Archangel warning all civilians to be indoors by 10 p.m.” 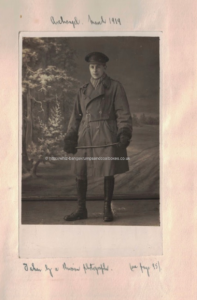 Kennedy on the Khalyan and Disconcerting News

“On Tuesday March 25th many alarming pieces of news came to my ears, and I seriously began to wonder whether I would ever see ‘Blighty’ again. I paid a visit to the hospital ship in the afternoon to see Kennedy. Now he is a brother Scot and I thought that he might cheer me up a bit with his conversation, belonging, as he does, like myself, to Auld Reekie. Instead of cheering me up, he put the ‘wind up’ me properly. He told me that a party of over 1000 Bolsheviks were marching on Solombola from the direction of Murmansk with 5000 rifles and 17 machine guns. Some of them he said, were already in Solombola, and on a given date, they were to blot out all British and Russian officers, and then invite the troops to revolt. He also told me that our great attack on the Bolsheviks on the Railway Front had failed completely, and that we had lost four officers killed, and 400 other ranks killed and wounded. Ten shots, he said, had been fired on British monitors at Solombola last night (I heard them), and three civilians had been murdered in the Archangel streets by Bolos. last night. Needless to say, I was most depressed when I left the hospital ship, but the arrival of a small mail from Blighty at night brightened matters up again considerably.”

“Whilst in Archangel I met Lt. Commander Richardson, who was in hospital at the same time as myself. His language was as choice as ever, and some of his yarns very tall. He told me about a certain standard ship which was on her way out here loaded up with stores. She was held up by the ice in the White Sea, and was taking in four feet of water per hour. Ice-breakers had been rushed out to her relief, but it looks very like a hopeless business. Richardson tried to cheer me up by telling me that affairs at home were much worse than in Archangel! What a life!” 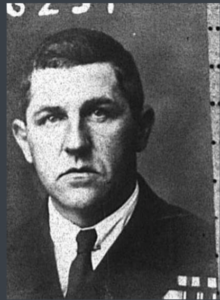 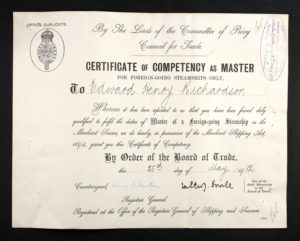 “The following day was ‘Windy Sunday’. Another officer and myself took a walk along to Archangel in the afternoon, and had tea at the Officers’ Club. On the way we saw a lot of the Civil Guard and cadets at drill. The Russians in Archangel who are loyal to the British fear an uprising of the Bolshevik element at any moment. We were informed that yesterday two hundred Bolos had been rounded up and arrested in Archangel. One of those arrested was the leader of the Duma – the local Lord Provost! Many machine-guns and lots of ammunition were found in various houses. We saw a big crowd gathered outside the Duma buildings, where the election of a new leader was going on. We were also told that the Russians are tired of having the British in Archangel, and want us to clear out, and let them manage their own affairs. That’s what I feel like too, for the whole lot of them are just a collection of dirty, diseased Bolsheviks – a two-faced lot, who eat our food, and say nice things to us at present, but who would denounce us to the enemy without thinking twice about it.

The Assistant Provost Marshall of Archangel, who dined with us at night, told us some thrilling stories of his adventures with the Bolos. He has been fired at nine times now at night, and seems to lead a charmed life. On the last occasion he was stepping on to the gangway of the hospital ship “Khalyan” where he was going to dinner, when he was shot at.

Towards eight o’clock things got more alarming and the ‘wind rose’. Some of our men came in with tales of shooting going on in Archangel. The A.P.M. departed in haste armed to the teeth, and we posted an armed sentry (R.A.M.C.) outside the mess door. The British Naval Units in Solombola ‘stood to’ all night, but nothing very alarming happened.” 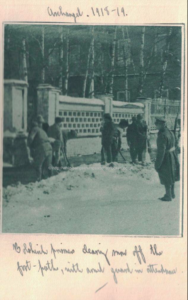 “On Saturday March 22nd there was a Flag Day in Archangel and Solombola. A flag-day of all things! I thought all that sort of thing had been left behind in Blighty. Anyhow I was touched for three roubles! What the flag-day was for I know not. I hope it was in aid of the Society for Cutting and Cleaning the Hair and Beards of Russian Priests!” 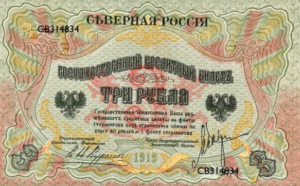 This was a period of hyper Inflation and put in context for the period of March 1919 £1 would get you about 400 rubles. 3 rubles was worth about 2d or 1p in modern UK money. It is impossible to give an exact rate of exchange as the rate was changing daily. Wages were often paid in kind with a sort of barter currency worth more than the paper money. 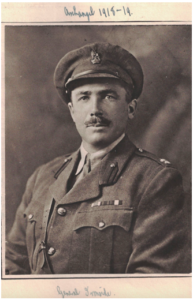 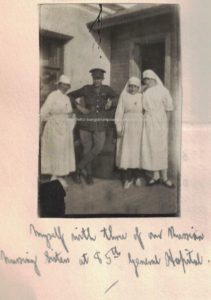 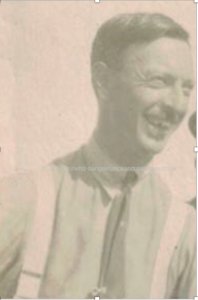