Relief came on the Monday by way of the men of the 10th Welsh, and Douglas and his men returned to Riez Bailleul for ten days of rest.

Riez Bailleul Farm was used for billeting men close to the front line, not only by the 130th (St. John) Field Ambulance, but by many other units of various armies during WW1. By June 1916 it became less peaceful there as it became a scene of fighting. In 1917 it was occupied by Portuguese troops. 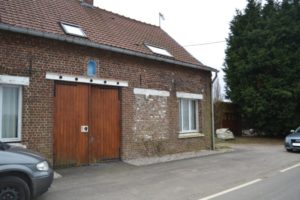 Lieutenant Meredydd Ffloulkes was today gazetted to the rank of Captain back dated to 1st December, Douglas referred to him as captain during the battle at Ebenezer Farm so, it was likely that they knew promotion was coming and were merely waiting for confirmation. It was only a few days back in December that Douglas and Meredydd had a narrow escape from shellfire at Richebourg (see post for 28th December 1915).

For Douglas relief was short lived.  Not long back at base, he found himself quickly back in the trenches. Fortunately he was soon relieved again on the Thursday 13th.