Master’s in the trenches with his only son;

Mistress manages the farm and keeps a poultry run;

Miss Belinda roasts and bakes and answers all the bells,

For Cook and House-and Kitchen-maid are all making shells.

Douglas made his way back with his kit and joined the throng of civilians, completely outnumbered by the mass of military men waiting to board the afternoon train from Waverley station. Soldiers of all ranks and Royal Navy men, shoved and pushed their way along the platform, many hugging tearful loved ones, many for the very last time, before the heavy train slowly hauled its way out of the station.

“I left Edinburgh at 2.30pm on June 27th arriving at Kings Cross about midnight. Crowded, uncomfortable train. I spent the night at the *Alexandra Pavilion in Victoria and was very comfortable. This was run by the Y.M.C.A and the people in charge were most hospitable.”

Douglas made his way to the station and described the scene at Victoria. This was a scene that was happening at the other London stations that served the south coast at the same time as hundreds upon hundreds of troops made their way to the Western Front for “The Big Push”. Wives, sisters, sweethearts, parents and friends made the station forecourts and platforms enormously crowded places with the noise of shouting and crying. Mothers shrieking as their sons boarded the trains.

Destinations were announced at the last minute then the people would rush to the platforms. The noise would have been deafening. The sulphury atmosphere and the rising steam from the locomotives, the shouting of railway staff. Then the sudden fright as a locomotive blew off its safety valves with the deafening hiss of escaping steam. The iron clad tyres of carts clattering across the cobbled forecourts bringing supplies in for the trains. Motor lorries and ambulances queuing to bring returning injured men out. Then of course the orderly queue of Hansom Cabs in the cab road with officers clambering down to join the men.

“Left Victoria Station at 8.30 on June 28th – packed train. Huge crowds at the station and many affecting sights as the last farewells were said. It was most distressing and I felt very mouldy as the train sped through England. Three crowded boats left Folkestone at 11.15am. Fine trip across arriving at Boulogne about 12.30pm. I entrained at about 1.15pm for Abbeville.

This was a painfully slow trip, but I had the company of some Welsh officers. At Abbeville we had a good tea at the Hotel de la Fete de Boufe and got into another train at about 8pm.”

“We were in the train all night without food and felt pretty miserable when we were eventually dumped at Candes at 10.00 am. We started trekking towards Bernville, where Divisional Headquarters was supposed to be, but luckily one of our motor ambulances came along and gave us a lift towards St. Hilaire. There I found the 130th (St. John) Field Ambulance and was warmly welcomed by all. St Hilaire was a tiny hamlet in lovely country. Close by was Domart, a beautiful village……, here we discovered a beautiful old church dated 1623.” 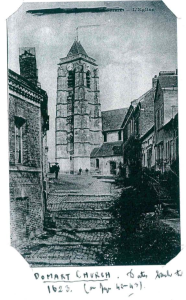 Domart Church dates back to 1623 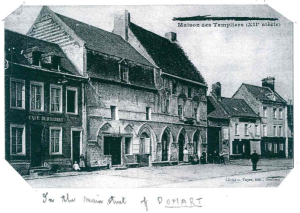 In the main street of Domart 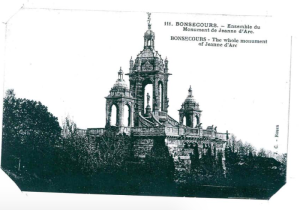 Joan of Arc’s monument in Domart 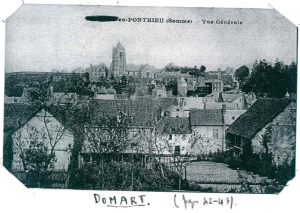 “On June 30th we left St. Hilaire at 4pm and marched in the centre of 114th Brigade column via Bernvil and Talmas to Maison, a large farm where we spent the night. We all slept together in a huge barn and were very comfortable. The day was very warm and sunny and it was a grand sight to see the seemingly endless column of men, nurses and wagons slowly moving along.”

On returning to France after being allowed leave home, too late for his father’s funeral only three weeks before, Douglas re-joins his men. The preparations for the “Big Push” had been in the making for six months and though Douglas never mentions it in the previous days, it’s hard to imagine that he wasn’t fully aware that it was about to take place.

After all, due to the carelessness of British preparations, the Germans knew all they needed to know two and a half months before the start. Not only had they been listening in to British un-encoded telephone conversations, but due to captured British prisoners, some deserters, some captured in battle, Germany had precise details of the British battle plan. They knew how many and what type and calibre of guns the British had. They had details of the newly formed machine-gun corps. Secret codes had been deciphered, British soldiers had been taken with detailed battle plans and instructions in their pockets! This gave the Germans time to build impenetrable defences, bunkers two storeys deep. Heavier barbed wire defences were built, heavily disguised artillery emplacement and machine gun emplacements built, while thousands of German troops were able to wait, hidden in their deep bunkers waiting for the show to commence.

Already aware of the plan for men to attack them across no-mans-land the signals to start the battle could not have been clearer. At 07.20 on the morning of Saturday 1st July a series of mines were detonated from tunnels placed under the German lines. Then at 07.28 the Artillery barrage that had ceaselessly expended almost 1.7 million shells over the previous seven days, non-stop day and night, ceased. This costly misjudgement gave the defending Germans the signal they were waiting for and immediately they poured out of the bunkers and lugged the heavy M18 machine guns into place. Two minutes later the whistles started to blow across the long front and the first of the men began to appear over the tops of their trenches. Slowly the British Army made its way into no-man’s-land, just as instructed. Told not to charge for fear of tiring themselves too early because they were assured that very few if any Germans would be left alive under the incredible week long artillery onslaught. In any case they were merely expected to walk into the German front line, clear out any remaining defenders, before proceeding in just over 20 minutes towards the German second line for which they were expected to reach and take in 1 hour 20 mins.

Reality was a little different, the first men over the top walked slowly into a wall of machine gun fire from many different positions, criss-crossing the battle field, firing over ten thousand bullets every minute. The Germans said they didn’t have to aim, just load, re-load and fire and keep firing.

The second wave following about 40 yards behind watched in bewilderment as the men in front fell one by one. Many slowly sank to their knees as heads fell forward as if kneeling in prayer. Some of the second wave thought it was a tactic they hadn’t been aware of, not realising that many of the men were dead or dying.

Apart from some exceptions in the south east and a small section to the north, a similar story happened all along the front. Some units to the north disregarded the instruction to walk and experienced more success, as did some of the French and adjoining British in the south east. However, the day as a whole is now accepted as the greatest disaster in the history of British warfare. British casualties for that first day were 993 officers killed and 18,247 other ranks killed out of a total of 57,470 killed, wounded or missing.

There were of course some successes where two divisions achieved all their objectives and many secret attacks from underground tunnels had the element of surprise. Had the main attack contained that element, it’s possible the story might have been quite different.

“On July 1st ‘The Great Somme Battle’ started. The bombardment, to us a good way behind the lines, sounded terrible. We heard that during the day all the German trenches between le Bassee and the Somme had been taken and the French had made good progress too.”

This is the first evidence that Douglas and his men, along with all the allied troops were being fed misinformation, spread by rumour, about the progress of the battle. The French to the southeast had indeed made good progress, their heavier artillery succeeded where the British had failed to cut through the barbed wire and to dislodge the enemy from his bunkers.

British losses on this first day were staggeringly brutal, almost 20,000 killed and another 40,000 wounded casualties, for very little gain, in fact no gain. Despite these alarming figures, Field Marshall Haig had received intelligence that the Allies had suffered 40,000 losses and wrote:

“ The AG reported today that the total casualties are estimated at over 40,000 to date. This cannot be considered severe in view of the numbers engaged and the length of the front attack.”

Meanwhile behind the lines, Douglas and the medical men got on with things, already it had become somewhat chaotic.

“After erecting a canvas hospital we got sudden orders to move on at 6pm. We struck camp hurriedly and my hands got badly blistered in helping take down the tents. We were ready to move by 7 o’clock, but had to wait until 10pm, before we got definite orders to go on to Puchvillers, only 4k distant. Here we were accommodated in huts. The roads were blocked with an endless stream of motor ambulances, carrying wounded to the casualty clearing station in Puchvillers. It was a wonderful sight. All day the guns roared away in front. Troops were everywhere and we were all tense with excitement.”

Are you a new reader?