“At 6pm on July 5th, a beautiful warm and sunny day, Lt. Buckly and I moved off with the stretcher bearers. We marched via Mericourt and Treux to Morlancourt. Many troops passed us on the way back from Monday’s great battle. All were very tired and dusty but full of beans. Many carried German helmets, caps and other souvenirs. We passed the Gordons and the 8th Devons. The whole countryside was seething with troops. We also saw a large number of German prisoners, our first glimpse of the enemy. They were all very tired and dirty and woebegone. Although they were very lucky to be where they were and out of the war now for good.

Morlancourt was a dirty little village full of troops. We were supposed to relieve the 23rd Field Ambulance (7th Division), but they had no orders to move. So we spent the night in tents in a field close to the hospital, which was in a dilapidated church. We saw a German Major being brought down under arrest. He had surrendered on Monday and when being brought back threw a bomb at some of our men, which he had concealed under his cap, killing three and wounding seven of them. I don’t know why he wasn’t shot on the spot! Our Division (38th) relieved the 7th Division at night.” 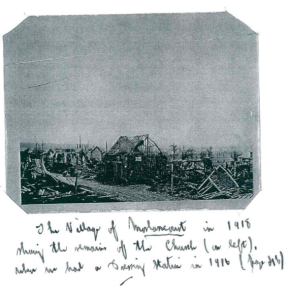