“On September 1st I went back to my quarters on the canal bank as the regiment was going into the line for five days. Just after I left the chateau ten shells landed in the courtyard, killing our tailor Ambrose Jones – and wounding four of our men, and some artillery men from the neighbouring batteries. I had a lucky escape! Our guns gave the old Bosche merry Hell for this and of course he replied in kind seeming to concentrate his fire on Bridge 6 just as I was about to cross the stinking canal. I had the wind-up properly, but dashed across to safety between the salvoes. The Hun was very angry all that night, and sent over lots of rum-jars* and rifle grenades. We had only one casualty – a bomber, hit in the cheek, and shoulder.”

*A “Rum Jar” was a slang term for a German trench mortar. It would typically contain shrapnel of random metal pieces inside what looked like a piece of iron pipe with a wooden base. A home-made affair, typically detonated by a time fuse.

“I spent my days in the line in attending to sick and wounded, seeing that the sanitation was good and in visits of inspection to the companies in the front trenches. Snipers were very active, and one had to go warily. Gas-alarms were frequent. I didn’t like them. One felt so helpless with one’s gas-mask stuffing up one’s face, and with the dug-out doorways hermetically sealed up with thick heavy blankets. I always went out into the open when I heard the gas alarm – klaxon horns and bells sounding all over the bloody Salient. Whenever the gas alarm was given, our guns at a prearranged signal put down a barrage on the Hun front-line so as to stop any attack. Of course, the noise was indescribable, and when this happened perhaps three times in one night, it was not to be wondered at that we got tired and irritable.” 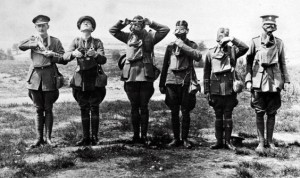