“Capt Stokes visited me on September 5th to ask me to catch a live rat for him! He is investigating Weil’s Disease, or, Epidemic Jaundice, a disease which has been attacking troops on the canal bank, and which is thought to be spread by rats. (Stokes proved this to be correct. I caught one old diseased rat for him. It was full of tuberculosis and also had the germs of Weil’s Disease in it.)”

Back on 16th March 1916, Young Douglas Page described how in a lull in activity he was able to bathe the men’s feet, many suffering from trench foot, in the la Bassee Canal. I mentioned at the time of the possibility of Weil’s disease in the water. Today’s post reveals something remarkable. I had no idea of the significance back in March, having forgotten the detail in today’s posting of what seemed like a typically nonchalant entry in the diary. A fact that might indeed have had more significance to Douglas in later life than it did at the time of his diary entry.

Captain Stokes’ request that Douglas find him a live rat to experiment on was to result in conclusive evidence of Weil’s disease being spread by rats, the germs being present in the internal organs and being dissipated in the rat’s urine finding its way into the canal water.

Stokes had in fact been studying Weil’s disease for some time and was to quote a study by researchers in Japan that had produced a paper on it. The discovery was a key factor in diagnosing the illness that had affected hundreds of troops at the time on the Western Front, particularly those by the Yser Canal in the Ypres area. 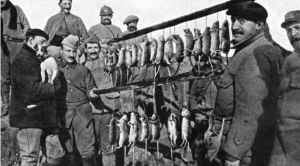