The Order sending Douglas back to the Front Line where he was to re-join his old unit the 130th (St John) Field Ambulance. Having left as Lieutenant Page he returned as Temporary Captain Page. The ‘Temporary’ tag before captain denotes that the role of captain was not of an established nature, therefore pay was not the same as a fully-fledged captain. It was at this stage in the diary that I realised that Douglas hadn’t bothered to let us know about his promotion. As we go to press, The Gazette which is the official government record has not produced the date we are looking for, though we will continue to search. 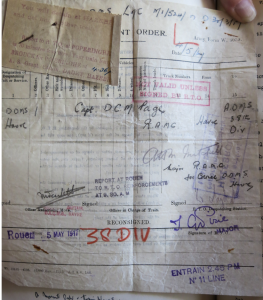 “On May 4th, sixty cases of gas-poisoning were admitted to my wards, but only two of them were really bad, and had to be treated with oxygen. The others, however, were bad enough, and it was very distressing to hear them all coughing away without stopping.”

The use of gas as a weapon in The Great War first occurred in what became Poland during early 1915. On the 31st January Germany attacked Russian troops at Bolimow near Warsaw with what was essentially nothing more than teargas. It was not a great success. Approximately 18,000 shells were unleashed on the unsuspecting Russians, but the effects were not as expected. The very cold conditions reduced the effectiveness of the gas. The Daily Mail reacted with its usual lack of restraint, chastising the Germans for “the cold-blooded deployment of every device of modern science”. By April 1915 at the 2nd Battle of Ypres the Germans this time released great clouds of the green mist of chlorine gas causing panic among its victims. Indeed the effects of fear of the gas in many cases caused more problems than the gas itself. The British Commander-in-chief Sir John French, despite being reviled by the German’s use of chemicals resorted to it himself by using it at the Battle of Loos towards the end of September, again with limited success. Some of the 140,000kgs of chlorine used blew back on the British troops causing mayhem and panic. Unable to see through the misted up eye pieces of their masks some soldiers removed them to see and subsequently suffered from their own weapon. 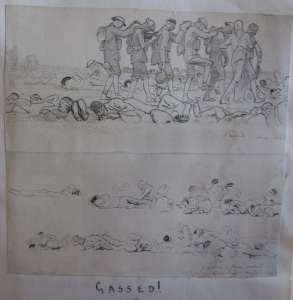