The fear of gas was ever present. It is thought that the fear of the silent weapon was actually more potent than the reality of an attack itself. Alarm systems had been developed to give as much warning as possible and these manifested as claxons, bells, whistles etc., and a device known as a Strombos Horn. These horns were placed at intervals of a quarter of a mile along the front and were powered by a compressed air cylinder which allowed the horn to be sounded for up to a minute continuously (see illustration). As soon as the alarm was heard, men were ordered to don their masks and respirators as quickly as possible. Horses were afforded the protection of a nosebag filled with wet hay.

Back at 130th HQ on this Tuesday at 10.50 pm a Strombos alarm was given and the entire camp quickly got into their protective gear, this took only a few seconds. Fifteen minutes later the all clear was given. 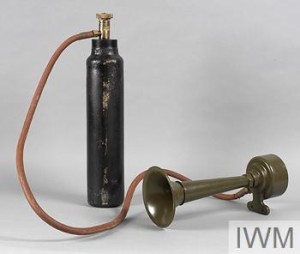