The trench system on the Ypres Salient was as in other places a labyrinth of narrow gauge railways that served the troops all over the Western Front. Douglas told us of his meeting Lt. Nesbit of 11th Army Corp Trench Tramways back on New Year’s Day 1916.  Canadian forces, along with the French and Australians were largely responsible for the creation and operation of much of the tramway network. Constructed along the lines of the French Decauville* railway system in 600mm gauge, the standard was adopted by all sides including the Germans. It was felt that the Canadians had a great deal of expertise in creating railways in the most extreme conditions and this experience could be put to good use on the Western Front. This also allowed the deployment of older men, railwaymen that normally would have been considered too old for fighting.

“On June 5th the Huns dropped shells all around us from 4.30 p.m. till 10.30 p.m. in an effort to smash up a field gun situated behind our dug-outs. Unfortunately the attempt failed. We would have been really glad to see the gun blown sky-high, for it annoyed us when it fired, and its fire always caused enemy retaliation. We all had the breeze-up pretty badly. When that was over all our big guns had a hurricane bombardment of the Hun front line for 10 minutes. The enemy retaliated and we had a lot of casualties, amongst them being some of the Tramway Company, two being killed and ten wounded. They were all old men – sixty or over. It was pitiful to see such old men being slaughtered like this.” 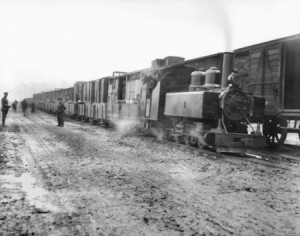 All Change for the Front!
Off-loading from standard gauge to narrow gauge at the battle of Passchendaele 1917