The rain interferes with progress

“Next day, August 1st, was very wet, and the wretched wounded were coming down soaked to the skin and covered with mud from head to foot.  The attack was held up. As I had only seven wounded Germans to attend to during the day, I was able to help in attending to our own wounded at Mordacq Collecting Post. Our men in the line were having a bad time with the rain and mud, and enemy shelling. The Germans attacked during the afternoon, and gained 100 yards, but we got it back again later. The guards on our left were relieved during the day. The roads were in a terrible state – wagons, guns, motor lorries, and caterpillars were slipping into ditches.” 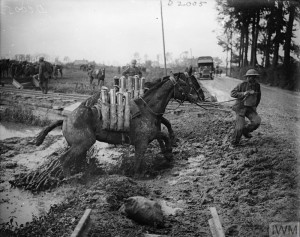 Near Ypres 1st August 1917 carrying shells a horse is dragged out of the mud. To the left a Decauville railway and in the foreground the remains of a standard gauge line.
Copyright: © IWM. Original Source: http://www.iwm.org.uk/collections/item/object/205194794

Mordacq Collecting Post was one of many places named by the British as they mapped the area. Contemporary maps show places with many imaginative names after places at home, but also characters like in this case. Colonel Mordacq was the Commanding Officer of the French 90th Brigade (45th Algerian Division) that were based nearby in 1915. (See the map below). Other places nearby were Joffre Farm. Lancashire Farm, Fusilier Farm, Signal Cottages, Crossing Lodge and Cheapside. Clearly names not easily tripping off the tongues of the local Belgians.

Mordacq Farm is near the bottom of square 17. That is where the Mordacq Loading Post would have been. 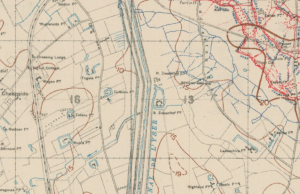 Mordacq’s Camp at the 2nd Battle of Ypres was at Zwaanhof Farm just to the right of centre on the map above. Reproduced with the permission of the National Library of Scotland. https://maps.nls.uk/index.html 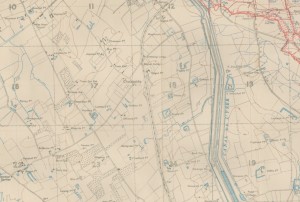 Mordacq Loading Post was at Mordacq Farm located on the map just below the 17 square. Reproduced with the permission of the National Library of Scotland. https://maps.nls.uk/index.html 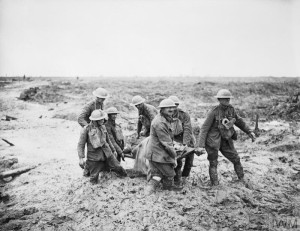 Stretcher bearers at Boesinghe a short way north of Ypres, to the west of the canal on the 1st August 1917. Copyright: © IWM. Original Source: http://www.iwm.org.uk/collections/item/object/205193365