Percy makes sure of an uncomfortable tour with the Colonel.

“Then on the 11th August the Colonel and I went for a tour of inspection ‘up the line’ via Proven, Poperinghe, Elverdinghe and Brielen. As we were going along the Switch Road a big ‘Perishing Percy’ shell dropped in front of us at the side of the road. Then as soon as we reached the canal bank the Huns started shelling it between Sussex and Fusilier blowing up one dug-out. We walked up Bard’s Causeway towards Pilckem. When we got to the cross-roads a huge ‘coal-box’ shell dropped in amongst a working party of about 200 men of the 29th Division, wounding several of them. Pieces of shell, and clods of earth fell all around us, but we weren’t injured. We helped to rescue the wounded, and then decided to get back to a quieter spot, as the enemy shelling was getting very unhealthy.” 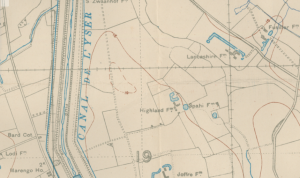 Bard’s Causeway was a bridge close to Bards Cottage (bottom left) Fusilier Farm (top right). Reproduced with the permission of the National Library of Scotland. https://maps.nls.uk/index.html 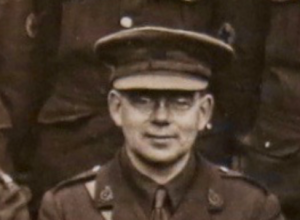 Why we sometimes have difficulty identifying locations.