“On the 30th August the 51st Division marched into the trenches on our right. It was good to see the ‘Jocks’ again. On the same day I went up to Fusilier A.D.S. for duty, and had a busy night – twenty-two wounded being brought in. One man died. He had been lying out in a shell-hole in ‘No Man’s Land’ for ten days, and had a compound fracture of one thigh, and wounds in the legs, arms and back. We kept him alive for an hour on strychnine and oxygen.”

The 51st (Highland) was a division of territorial or reserve regiment, formed in 1908 after the re-organisation of the army. Arriving in Flanders in force during 1915, Haig considered them largely untrained and inexperienced in battle. This however gradually changed as time went on and the Division saw considerable action in Flanders and particularly on the Somme where they fought courageously to capture Beaumont Hamel, taking 2000 German prisoners. They had fought successfully at Pilkem and taken positions in advance of the Steenbeck River, a small stream with steep sided banks that was swollen with the recent heavy rain. They would continue to perform heroically until the end of the war.

The ADS at Fusilier was in the process of being whitewashed when Douglas arrived for duty, where he was kept busy with a steady stream of wounded being brought in.

The unfortunate chap that had lain alive for ten days in a shell hole is described by Douglas as being treated by strychnine and oxygen. The use of this treatment had become popular in the later part of the 19th century. It was used to treat pneumonia and was thought to induce stimulation to the muscles and cause convulsions. It was also being used as a performance stimulant by some athletes.  Its use here maybe was to try and stimulate the patient into recovery, however the use of strychnine a powerful and ultimately fatal poison possibly hastened his demise. 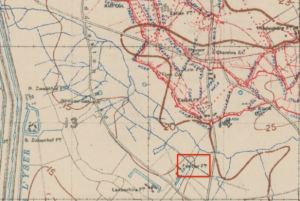 Fusilier Farm. Reproduced with the permission of the National Library of Scotland. https://maps.nls.uk/index.html