Up all night in muck and bullets!

“On the 4th September the 10th Welsh came up to relieve us at night, but the doctor, Captain Woodhouse, was killed on the way up, and I had to stay on. It was another awful night. The shelling was intense, and I was up all night attending to the wounded. The place was a shambles, and I was covered with blood and mud.”

Captain Bernard Woodhouse, was a popular officer who had been with the 130th until April that year. He, like most M.O’s was sent where needed and in April he had been transferred to the 10th Welsh. The fact that he had received a fatal piece of shrapnel to the head, must have born heavy on Douglas. There’s no doubt he knew Woodhouse, but the fact that he got no relief that night would have been secondary to losing a colleague.

Captain Woodhouse had been evacuated to No. 64 C.C.S. where he died of his injuries on the 5th September aged 23. 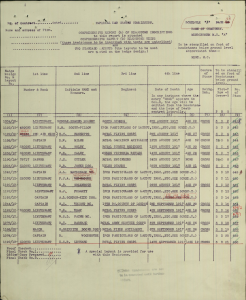 The schedule for Captain Woodhouse’s grave.