A long day back to duty.

“Up next day at 4 a.m. and caught the ‘trenches train’ at 5 o’clock. What a life! We went to Berguettes, via St Pol, Choques and Lillers. It was a painfully slow journey. We saw a huge Tank Camp outside St Pol, and a big railway smash between two goods trains. We got to Berguettes at 2 p.m. where I had quite a good lunch in a ‘pub’. I met Father Brown who told me that the Division had come out ‘of the line’. Good! Spotting a motor ambulance I nipped into it and got to Merville where I found Divisional H.Q. about 5 p.m. I was sent on to 130th Field Ambulance for the night. I found them at Estaires. The Colonel was in good form, and had his D.S.O. ‘up’. He had arranged that I was to remain with the Ambulance for duty, and not go back to the 13th R.W.F. This was good news, for after all life was more comfortable with the Field Ambulance, and one got more work to do. I was billeted in a large house and was most comfortable, sleeping between sheets – a great luxury in France!”

Douglas set out on the laborious journey back to the French Western Front to meet up once more with the 130th (St.John) Field Ambulance in Estaires, much to his personal satisfaction.

Tanks had begun to gather just outside St. Pol which became an important point in the deployment of tanks and was the scene for a later policy of deceiving the Germans into thinking the Tank Division was larger than it really was.

Tanks near St.Pol. Each with a crew of 8 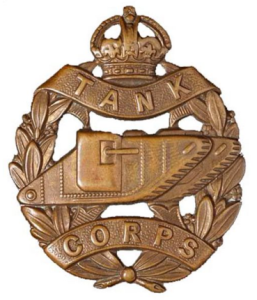 After putting up a good show during the preliminary battles leading up to the Passchendaele offensive, particularly at Pilkem Ridge, the 38th Division had gone a long way to restoring its reputation among the army hierarchy. Suffering enormous losses at the Somme with the fight for Mametz Wood, Haig put it down very unfairly to lack of endeavour. The 38th were withdrawn from the main offensive in September 1917, being used to take up new positions in the area around Armentieres. Then given time to rest and train before taking up fighting positions once more in February 1918.