The School of Instruction

“On the 20th Feby I was packed off by car to the 1st. Army R.A.M.C. School of Instruction at Bruay, near Bethune. There were about 40 R.A.M.C. officers, including 10 Americans at the School, and we all slept in a large wooden hut on good hospital beds.

Each morning we were up at 7 o’clock, and had a course of physical jerks before breakfast. It was great fun, and I enjoyed this part of the day’s programme very much.”

From Wednesday 20th  February until Saturday the 2nd March Douglas attended the RAMC School of Instruction at Bruay, just south west of Bethune. Unusually for his diary, he goes into a lot of detail about the instruction he received about medical matters. We will go into the events in more detail in any printed version of this diary.  Suffice to say for now that the men spent their spare or non-study time doing physical exercise, route marches or on horse riding exercises, sometimes just going for a ride together.

Bethune had been an important behind the lines centre for British and Allied troops since the beginning of the war, but the time for Bethune was running out. It was soon to be almost totally destroyed in the forthcoming Kaiser’s “Spring Offensive”, or “Operation Michael”.

“The 24th Feby. was a Sunday, and we had Church Parade at 11 a.m. In the afternoon eight of us went out on horses for some fresh air, and had a great time.”

“On the morning of Saturday, March 2nd (my birthday) there was a terrific bombardment. We found out later that the Germans had attacked the Portuguese, and broken through, but that the ‘Geese’ or ‘Pork and Beans’ assisted by our 42nd Division had driven the enemy back again.

That same afternoon I returned to L’Estrude after a very pleasant and instructional week at Army H.Q.” 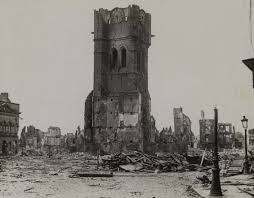 The fate awaiting Bethune after the German Spring Offensive of 1918. Photo via Creative Commons http://www.wikipasdecalais.fr/index.php?title=Fichier:Béthune_beffroi_1918_4.jpg