“The General left for Teogra on horseback next morning (Sept. 25th) and another company of Americans joined us from Obozerskaya soon after he had gone. They were a fine-looking lot. In the evening two of our cavalry men came back with the story that whilst out on patrol they had been attacked by the Bolsheviks in the village of Meijmovskaya, which is about seventeen versts from here on the road to Plesetskaya. One of them had his horse shot from under him, and was captured by the Bolos. He managed to escape, however, after killing one of them. He had only a pair of trousers on when he arrived here, and was absolutely fagged out. The other man said that he had killed two and wounded one Bolo. with his rifle. Madame Boskareeva (sic.) arrived in the forenoon, and wanted to see Col. Henderson. But he had the ‘wind-up’, and wouldn’t grant her an interview. She wanted to get on his ‘staff’! She was as fat, if not fatter, than ever! A large load of rations arrived at night.” 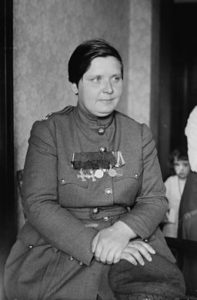 Maria Botchkareva had fought in the Tsarist Russian Army and was determined to carry on the fight against the Bolsheviks. However, as an imposing character that she was, she found difficulty in gaining credibility with the allies and wasn’t considered, as a woman, to be suitable as a fighting soldier. In December 1918 the former Tsarist General Maroushevsky who was in charge of the White Army in Archangel wrote:

(1) “Madame Botchkareva arrived from Shenkursk and reported to me on the 26th December. She wore officer’s uniform of a Caucasian pattern, with epaulettes. She was accompanied by Lieut. Filipoff, whom she described as her adjutant.

Madame Botchkareva offered me her services for work in the organisation of the Russian Forces.

I do not undertake to estimate the merits of Madam Botchkareva’s services in the Russian Army. I consider that the shedding of her blood in the service of her country will be appreciated finally by the Central Government and Russian history.

I only consider it my duty to declare, that within the limits of the northern region, thank God, the time has already come for quiet creative work, and I consider that the summoning of women for military duties, which are not appropriate for their sex, would be a heavy reproach and a distasteful stain on the whole population of the northern region.

I order that Madame Botchkareva take off her uniform and that Lieut.Filipoff report immediately to the Military Command for registration, to be detailed for duties suitable to his rank and service.

The carrying out of this Order is placed under the supervision of the Town Commandant.”