Resemblance to an Executed Diplomat

“On Friday 25th Oct. I met the Camp Commandant, Major Turner, and had a long talk with him about the sanitation of the place etc. He was nick-named – Major Casement – being not unlike that worthy! He was a very heavy drinker, and was in many an escapade whilst I was on the Railway Front. The sanitation of this part of the front I found to be hopeless. There were no proper latrines, and no facilities for the men washing.”

The mention of Major Casement is a clear reference to Roger Casement executed in 1916 for his part in the Easter Uprising in Ireland. We can assume Major Turner bore more than a passing resemblance to the former British diplomat. 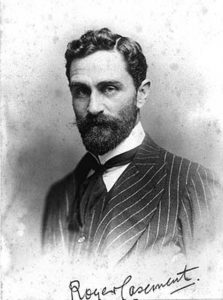 One Response to 25th October 1918 Friday