Shell Shock from a Pistol Shot?

“The next day the A.D.M.S. wired me to send Capt. Jones forward to Verst 455 to relieve the American doctor, who had developed ‘shell-shock’ when somebody fired a Verey pistol one night!” 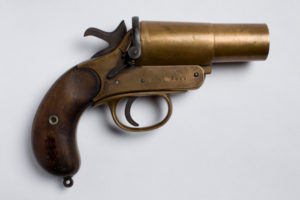 The Verey pistol (also Very) was named after its American inventor Edward Wilson Very who was a naval officer. Although his name was spelled without an ‘e’ both spellings are used for his invention.

It wasn’t a weapon but was used for firing warning flares and also used to light up an area like no man’s land or enemy trenches.

It has on occasions been used as a weapon and at close range it was a formidable one, similar to having a firework shot at you at high velocity.

Shell shock in the modern day is more commonly known as post-traumatic stress disorder (PTSD). It was first written about in The Lancet in 1915 by Charles Myers consultant psychologist with the British Army. In theory however throughout most of the war the British Army merely looked on shell shock as lack of moral fibre, cowardice or just plain shirking.