One Eye and a Fox Up The River

“Three days afterwards the H.M.S. ‘Cyclops’, depot ship, and H.M.S. ‘Fox’ gunboat went up the river with a big number of naval ratings aboard.”

HMS Fox was a second class cruiser of a modest 4360 tons loaded with guns etc. Built in 1893 and entering service three years later she was by 1919 considered obsolete and approaching the end of her life. Although built of steel her hull was clad in both copper and wood to deter the growth of barnacles in the tropics for which she was intended. The rapid encrustation in warm water could severely affect a ship’s performance. Her duties were mainly as a show of force to those considered inferior nations and offer some kind of threat to enemies. However, it was known that she would be of little use in a sea battle. Withdrawn from service following her duties in Archangel she was scrapped in 1920. 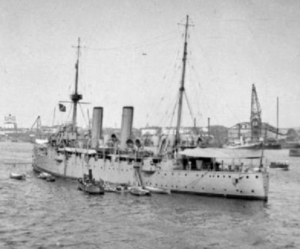 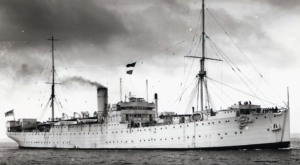 Whist under construction as a passenger liner the “Indrabarah” for the Liverpool based Indra Line in 1905, she was purchased by the Royal Navy for use as a depot repair and supply ship. She spent most of WW1 in Scapa Flow in service to the Grand Fleet. Decommissioned in April 1919 she was immediately reinstated and despatched to Archangel to back up the Intervention force. She remained out there until October before returning to Chatham. Nicknamed “Cycle-box”, HMS Cyclops was adapted for use as a submarine depot and then had a long period of service and survived WW2 before being scrapped in 1947.