An Emptying Hospital Gives Time For a Swim

“Next day the ‘Khalyan’ left for home with many wounded on board. Some of our officers went also, but still I remained. Things were very slack in hospital as we had evacuated most of our patients to the ‘Khalyan’. Most of us were able to get away for a bathe on Moses Island every day. We took it in turns to stay behind as Orderly Officer.”

The pictures below show Lt. Herman whilst bathing on Moses Island and his impersonation of Lady Constance Stewart-Richardson 1883-1932. Lady Constance was a controversial dancer, the daughter of nobility who married an officer of the Black Watch who was killed at the First Battle of Ypres in 1914. Her scantily clad theatre performances brought about the wrath of Edward VII who banished her from court, despite his own behaviour which might seem a little hypocritical these days. 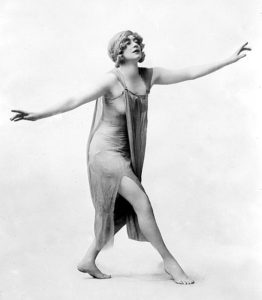 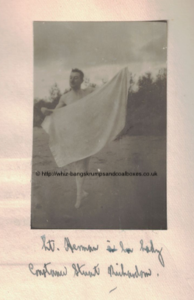 Lt. Herman’s version of her 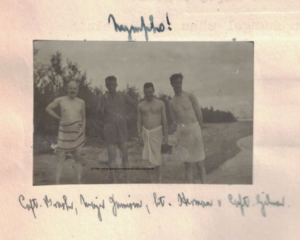 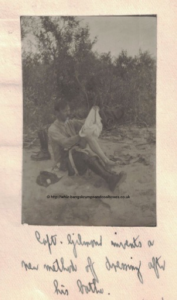 Captain Gilmour invents a new method of dressing after his bathe.