“On the 18th July, we marched into Happy Valley – a dismal hole, full of troops. I managed to “acquire” a moth-eaten bell-tent and made myself as comfortable as possible. Here I met my old school pal, *Jimmy Dandie, whose battery of heavy guns was situated about a mile from us at Colincamps. We had a great yarning together, and he had tea and dinner with us – the latter meal we partook of in the Field Ambulance Dressing Station Mess on the hill-side. Here the Battalion rested until July 24th. I had huge sick parades each day – 60-80 strong – but there were no cases of serious illness.”

*Douglas had attended George Watson’s College in Edinburgh with James Dandie. James Naughton Dandie saw the whole of the war on the front, having served since 1914 with the Royal Garrison Artillery.

Born in 1894, he was the same age as Douglas and had a distinguished career both in the war where he became Acting Captain and like Douglas won the Military Cross. By the time of the second world war he was practising as a solicitor in the Stirling area, later becoming President of the Law Society of Scotland and lived until 1976. 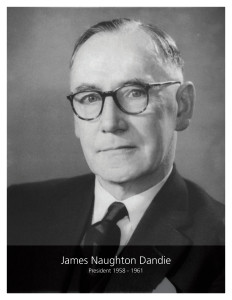 Courtesy of The Law Society of Scotland