“We packed up about noon on the 24th – and moved into the trenches in front of Auchonvillers. It was a long trail – about 7 miles – and I was at the rear of the column, as usual. Just as we were approaching Battalion Headquarters at White City and going down the communication trench, named Fifth Avenue, the Huns spotted us, and started shelling with whizz-bangs. We got merry Hell for 20 minutes, and I thought my last minute had come. We lay like pancakes at the foot of the trench till it was all over. Four men were killed and three wounded. They belonged to the 9th Fusiliers whom we were relieving. The trenches were blown in. I attended to them and sent the wounded men back in charge of stretcher-bearers. Then I went on to my Aid Post which was fully 400 yards from Headquarters at *White City, at the junction of Mount Joy Avenue and Roman Road. It was a hopeless place, and I found that I couldn’t get a stretcher into the dug-out. Then the Huns started to drop shells all round the place – great big “crumps”. They smashed up our engineers’ dump close by – picks, shovels, wheel-barrows etc, were flying all over the place, and the trench was knocked in. With my stretcher-bearers I took refuge in a 20ft deep dug-out near at hand. Whilst disappearing into this refuge I was violently struck by a piece of something hard – wheel-barrow, shovel, shell, I know not – on the back. This helped to accelerate my descent into the lower regions, and luckily only badly bruised me and gave me a fright.

It felt safe down there, but I didn’t like the way the whole place shook and the candles went out when a big shell dropped over-head. The place was full of rats too, which didn’t add to one’s comfort. Twice during our first night in the line the Huns shelled that dump, and I had the “wind-up” properly. We had one man killed, one wounded, and one shell-shocked during the night. About 11pm the Huns did a lot of damage in our front line with trench-mortars. Our field guns gave them HELL for 4 minutes, which soon stopped their nonsense.”

*White City was a dressing station that was so called because it was dug into a chalk ridge, near Beaumont Hamel. 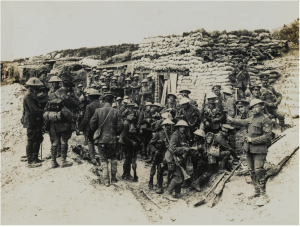 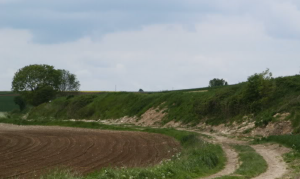