Rather oddly it would seem, Douglas Page although nearing the end of his contract and so approaching the end of his term of duty, was sent on a training course. Despatched to the 2nd Army Gas School at Oxelaëre near Cassel on the French side of the Franco Belgian border he was to receive valuable instruction of the latest defences against gas attack.

Douglas takes up the story:

“From October 23rd to 26th I attended a course of instruction in gas at the 2nd Army Gas School, Cassel. I went in a motor ambulance via Poperinghe. It was a lovely run on a sunny warm day. The actual school of instruction was about a mile out of Cassel – at the foot of the hill on which Cassel is situated. Oxalere was the name of the place, and here assembled about 9.30am a dozen of us – all doctors – from various Field Ambulances in the 2nd Army. Capt. Macalister – a Scot – was the Gas Officer, and he started off by giving us a 2 hours’ lecture on Cloud Gas etc. Afterwards we all went up the hill to Cassel, and were allotted our billets. I had a lovely room in a big chateau – quite the homeliest billet I’ve had since coming to France. After lunch at the  ”Hotel Sauvage” some of us had a stroll round the town – a beautifully clean place on the top of a hill. We got lovely views of the surrounding country. 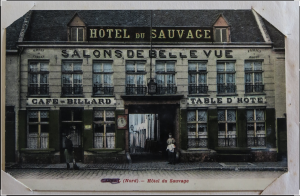 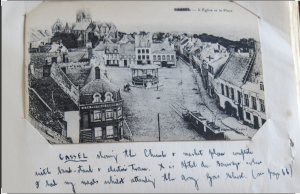 “Cassel showing the Church & market place complete with band-stand & electric tram. X is the Hotel Sauvage where I had my meals whilst attending the Army Gas School.” 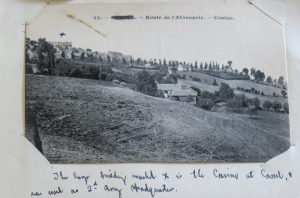 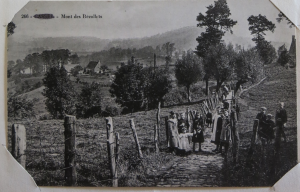 “Below is the path we took on our way from Cassel to the Gas School at the foot of the hill.” 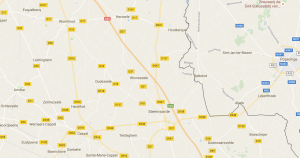 For three days we were instructed in gas warfare and were put through attacks during which chlorine, phosgene, and lachrymatory gases were used. It was most interesting work. We were supplied with new box respirators which acted admirably. On our last night we gave a dinner to our instructor. It was a most hilarious evening.

When I got back to the Field Ambulance I was kept busy for several days lecturing to the men on “Gas Warfare”, and instructing them in the use of the new respirator. I also put them through the test chamber – a hut filled with “tear” gas, and gave demonstrations of smoke and gas bomb attack. The latter demonstrations were most amusing affairs, and were very popular!”