“On Tuesday November 7th 1916, I went via ambulance car to the Corps Rest Station at Mont des Cats with some patients. It rained heavily all day, and thus spoiled what would have been a pleasant trip through interesting country. The Corps Rest Station was situated in the ancient monastery on the top of the Mont des Cats. After leaving our patients there I took the car on to Bailleul where I visited the Headquarters of No 1 Squadron RFC.  Here I had hoped to get some news of Gordon Sturrock (my future wife’s brother) who had been missing for some days. But at that time I got no further information. Later on we heard that the aeroplane in which he was acting as observer had been shot down by the enemy, and that Gordon had been very grievously wounded. He died later and was buried at Lincelles in Belgium.” 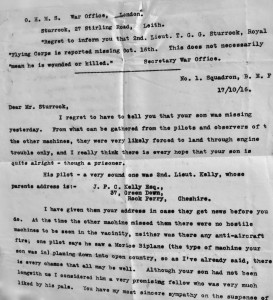 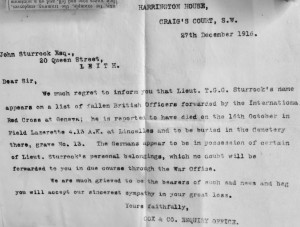