“There was a large aerodrome near us and all officers went up in planes for liaison work. I had a short flight too. It was most thrilling, but my pilot did the falling leaf stunt which upset my equilibrium for a day or two afterwards. At this aerodrome I saw several of the very latest fighting machines – single-seaters capable of flying at 160 mph and carrying two machine guns each.”

By 1917 military aircraft development had come quite a long way, probably thanks to the demands of war. The fastest machines available to the Royal Flying Corps at the time were the S.E. 5 and 5a. S.E. stood for Scouting Experimental and production at the new Royal Aircraft Factory in Farnborough, Hants., was in full swing. The S.E. had been designed to try and negate the high level of fatalities being inflicted on Britain’s inexperienced new young pilots. Being easier to fly, the S.E.5 became one of the war’s most successful aircraft, soon developed into the more powerful S.E.5a its single cockpit was augmented by two machine guns and had a service speed of 138 mph. It is no surprise therefore that the pilots had claimed to Douglas a top speed of 160 mph, as this might have been possible in a powered dive. 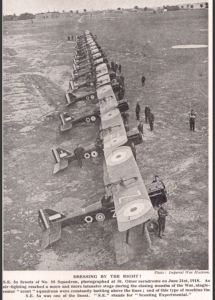 I am grateful to Mr. John Steward of the Farnborough Air Sciences Trust Museum for the photograph taken from his copy of “Twenty Years After. The Battlefields of 1914-18 Then and Now”.

You can learn more of the museum here. https://www.airsciences.org.uk

The machine that Douglas enjoyed his “falling leaf” adventure in is lost to history, but a likely contender was the two seat R.E.8 bi-plane that was ubiquitously employed on the Western Front for reconnaissance and light bombing duties. Over 4000 of them were produced during the war. It wasn’t the only type that he could have flown in but the sheer numbers of them make it a reasonable choice. 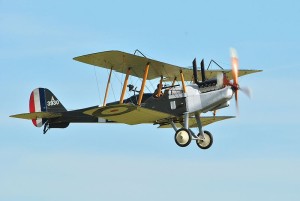