“We left Estree-Blanche by motor bus (London buses) for Prandelles on Sunday July 15th. Sunday was a favourite day for moving us about, or having straffes! There were lots of troops on the move. Capt. Buchan came back from leave in the evening and I returned to the Field Ambulance, now stationed at Stenbecque – a small town full of troops including a whole Australian brigade.”

Below is an extract from the 13th Welsh diary. This highlights some of the spelling mistakes in the diary as to name places etc. Prandelles was in fact Pradelles and Stenbecque was Steenbecque, which is quite important when trying to locate places. It has been a recurring feature in the diary, possibly indicated that it was typed up from notes (now lost) by a third party. This coupled with official name changes and alterations that have evolved over the century since the war. This is not confined to this work, but is a slow process that takes place in all areas over time. The activities of estate agents is one source of this, along with natural movement and development. For instance, the area near Arsenal Stadium seems to have changed in recent years from Highbury Hill to Arsenal and is beginning to be reflected as such on modern maps. A naturally occurring phenomenon that just adds a degree of difficulty to the researcher’s work. 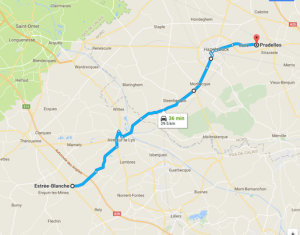 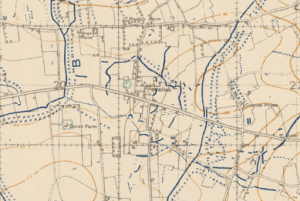 Pradelles on a British trench map 1918. Reproduced with the permission of the National Library of Scotland. https://maps.nls.uk/index.html