“Next day I got the job of going round the country collecting sick men for hospital in an ambulance car. I went out by International Corner, and saw many interesting sights, including five French armoured trains, hundreds of tanks, numbers of hospital trains, and new tent hospitals, large numbers of cavalry and many squads of Chinese and nigger labourers.”

Douglas set out from Proven to drive around the neighbouring clearing stations and bears witness to what was the assembling of forces for the next “Big Push”. The area to the west of Ypres was a bustling collection of logistics as the Allies assembled troops and equipment around the area. Now only 12 days away from what was to be one of the war’s biggest actions and certainly the biggest since the relatively unsuccessful campaign on the Somme the previous year. Douglas’s comrades had taken such heavy losses on the Somme that they had been withdrawn from the front line, but were now preparing to rejoin the sharp end of business as now evidenced by build-up to the 3rd Battle of Ypres. General Haig had somehow managed to convince his bosses back in Whitehall that the awful losses of 1916 could be avoided this time with one more large offensive. The hope was that a swift decisive action would be more successful without such a great loss of life.  The Americans had just entered the conflict and confidence amongst the Generals was high. Not so high though in the French Army whose men, depressed at the huge loss of life for little gain, and lack of pay had lost faith in their leaders and had begun widespread mutinies. 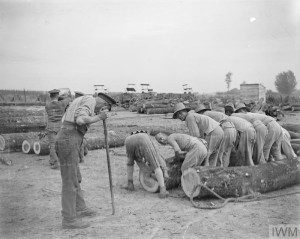 International Corner was at the intersection of where allied armies met. The new tent hospitals were in place to accept the expected casualties as were the new hospital trains. At Haig’s request in 1916, Chinese men were recruited into the Chinese Labour Corps and transported directly from the poverty stricken areas of China, with the lure of high or even regular wages. The end of 1917 would see 54000 of them in Flanders. The rise in number only halted by the British Navy being unable to guarantee transportation from China. Many other nationalities were recruited from throughout the British Empire including aboriginal Australians and many Africans and Indians. Many fought on the front line, but many just came as labour, building the infrastructure to serve the army.