“On July 21st, we moved to another camp in a wood near St Sixte. It was a pleasant spot in a fir wood with lots of heather and mossy banks – not unlike a bit of old Scotland. The aeroplane activity was great as the weather was ideal. Any Hun planes that crossed our lines were soon driven back. Great numbers of captive balloons were up too, and our guns were unceasingly active.  We were visited by the D.D.M.S. (Deputy Director Medical Services) 14th Corps in the afternoon. At night the Huns put over lots of high velocity shells, but did no damage.”

The diary of a Belgian priest, not too far away to the southwest of Poperinghe, near Dickebusch, also comments about the number of observation balloons he can see: twenty three British balloons and eight German ones. He also lamented the fact that today was Belgian Independence Day but there were no Belgian troops left in the area to celebrate in his Church. 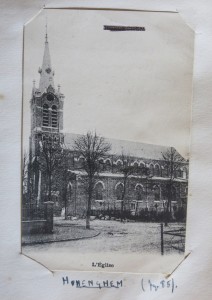 Haig, however was feeling a little alarmed about a letter from The Chief of the Imperial General Staff, Sir William Robertson telling him that the Cabinet had not yet approved Haig’s plans for the forthcoming offensive. He wrote back complaining that the plans had been agreed as far back as the previous November, immediately after the official ending of the Battle of The Somme!  Robertson, felt confident that although relations with the new Prime Minister Lloyd George were strained, approval would soon follow. This with arrangements pretty well advanced around Ypres.

In the Dickebusch area the day also saw a great deal of artillery action from both sides early in the morning and throughout the day, with some spectacular results as ammunition dumps were hit.