For quite a while Douglas and his colleagues had been kicking the dust around in the area north west of Poperinghe due to the prolonged summer weather. All was about to change now, preparations for the large-scale battle that was nearing its start had been dominating the area for some time. Although activity including much artillery action had continued unabated, the big one was almost ready. Haig and his chiefs of staff were confident that the intense training and meticulous preparations would soon pay off. The Generals hoped the lessons from last year on the Somme had been learned and mistakes could be rectified. Just like at the Somme though, the Allies failed to use surprise as cover for the attack. An artillery bombardment that lasted two weeks this time, came from 3000 guns, depositing four and and a half million shells and acting as a calling card. They failed to dislodge the Germans from their heavily fortified positions. Germany knew and expected the offensive to begin quite soon.

Suddenly however, the weather turned. Just like now in 2017 the hot sunshine turned to heavy downpours and in a short period of time the countryside already smashed up with little effective drainage, turned into a quagmire.

“Then the rain came on on Sunday 29th. Soon all the roads and tracks were in a terrible state of mud, and several wagons got stuck, and had to be abandoned, or pulled out with extra horses and men.” 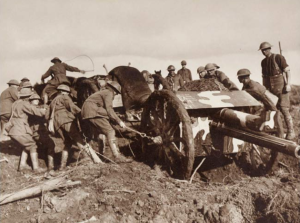