Having spent time around Proven and then on to Saint-Sixte which is the location of a Trappist beer producing abbey, Douglas and his men move on to the camp at St. Sixte and then on to Capernoll Farm.

Look on the British trench map dated 30th June 1917. In the top left corner you can see St. Sixte and towards the middle International Corner. To the right of that lies Coppernollehoek (Coppernoll Corner or Copernoll Farm)?

Four days to go to the Big Push and Douglas is describing much fighting in the area already. German bombers lighting up the sky with flares and flarebombs

“On Friday, July 27th, we moved forward to Capernoll Farm, where we were accommodated in tents. That night a large number of Hun planes crossed our lines and dropped huge bombs all round us. They dropped lights which lit up the whole countryside. The noise was terrific. Our searchlights and anti-aircraft guns got busy. We got badly scared, and spent most of the night lying in a ditch. In the early morning our guns bombarded the enemy lines with terrific intensity.

We heard that the enemy had retired behind his third line beyond Pilckem, and that our 15th Welsh Regiment had been badly cut up by shell fire in the Hun third line. The Guards Division on our left had also gone forward, but had had to come back as their right flank was in the air.” 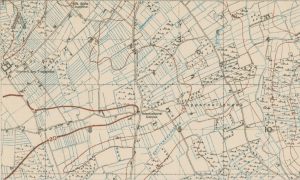 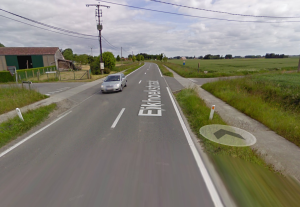 The modern view of International Corner 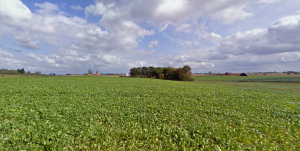 The view towards Coppernollehoek today