No prizes for guessing the weather forecast.

“More rain on the 4th August, and very cold. We moved back during the day to a camp in a wood near Chateau Lowrie. I was sent on in advance to take over from the 61st Field Ambulance. There I met Quinn, the Irish Rugby Internationalist, and Jones the Welsh Internationalist. Here we remained at rest until 18th August. Of course we had to carry on our usual work of collecting sick, and attending to them in our hospital – a marquee – but we had any amount of spare time, and most of us spent it in sleeping – at least during the day we did, for at night sleep was impossible owing to the enemy bombing raids, and the attentions of “Perishing Percy” the high velocity gun.”

The Irish rugby player was Joseph Patrick Quinn born November 23rd 1888 who played wing for Ireland up to the outbreak of war in 1914. He scored a try in the 6-0 victory over Scotland at Landsdowne Rd, Dublin in 1914 and also scored a try against France in Paris 1914 as Ireland beat France 8-6. Both Quinn and Jones played in the Five Nations Championship of 1914, with Quinn who played wing scoring tries against Scotland and France. Hardly surprisingly there were two Jones’s playing for Wales but the favourite candidate would be John “Jack” Jones who was part of the “Terrible Eight” a physically hard group that played Ireland (Quinn was not involved) in Belfast. It is regarded as the most violent ever of all rugby internationals. Percy Jones would be the other candidate, but as yet neither of their war records has come to light. 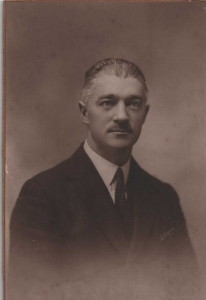 The mention of “Perishing Percy” the high velocity gun is of particular interest. The Germans introduced a high velocity gun in 1918 known as the Paris Gun, but my research so far has failed to unearth one in use in August 1917. This will be updated as and when.