The prevailing wind at the time had been a brisk westerly, which had apparently favoured the Germans. This was given as a reason as to why repaired machines were prevented from re-joining the action at the front and also why the RFC were not able to be as effective as required. Haig was in conference with many of his general staff and tried to encourage the different services to provide as many fit men to fight in the lines as possible. Also, to get existing men to work and fight for longer hours to make up for sustained losses.

A Catholic priest only a couple of miles to the south remarked that at 9.30 pm an entire squadron of German planes flew over laden heavy with bombs, with engines roaring under the strain. Artillery and guns from the ground fired angrily at the “Birds of Death” which hurriedly scattered bombs all around.

“Sunday 19th August was fairly quiet. Being a lovely, clear, sunny day aerial activity was very great. 42 of our planes were up at one time. It was a wonderful sight, until two were shot down in flames by German guns. The Hun planes were never in evidence during the day, but he flew over in force every night, and we could hear the bombs crashing all around.” 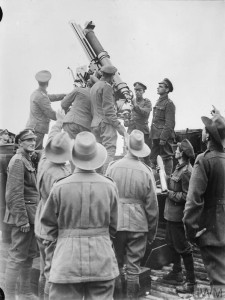