The Road to the Front

“Calais was left at noon on the 25th September in a very slow train which dumped us down eventually at Steenvercke about six o’clock in the evening! From Steenvercke we had to walk 3 miles to the 38th Division Headquarters. Luckily I got onto a motor lorry that was going that way. I was sent on by car to Ercquinghem where I found the 13th R.W.F. transport lines. The Transport Officer directed me to Battalion Headquarters, and I waded on and got lost! However at Bois Grenier I spotted a Dressing Station, and inside was Capt.’Billie’ Burke, who hailed me, took me in and fed me. He persuaded me to spend the night with him. The Dressing Station was in the cellar of a shell-shattered brewery – but there was no beer to be had!”

It does seem a little strange thinking about a British Army Officer wandering around the countryside in war torn French Flanders, trying to find his unit. Having to make his own way, walking, hitch-hiking and then stumbling, purely by chance on his old Irish pal Captain Burke.  What a shame there was no beer to cheer things up! 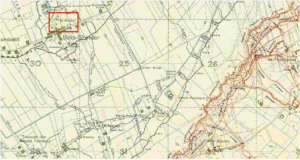 The 1917 trench map showing the Brewery, now a war cemetery. Reproduced with the permission of the National Library of Scotland. https://maps.nls.uk/index.html 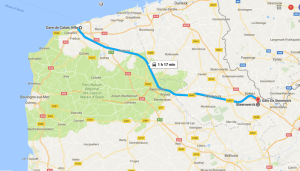 The modern rail journey from Calais to Steenwerck 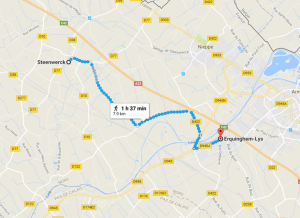 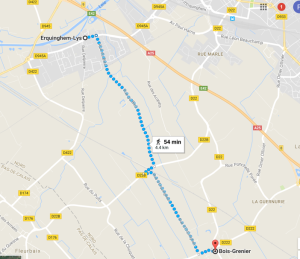 The modern day journey would not differ much from 100 years ago. A probable route.