Pork and Beans were the order of the day

“One day 5 Portuguese officers and 16 other ranks came up to have a look round the lines. They had lunch and tea with us, and it was very funny trying to make conversation with them. Some of them spoke French, luckily. Three days later a whole battalion of them (‘Pork and Beans’) arrived for instruction. Their doctor  was attached to me. He spoke French and I got on very well with him.”

The Portuguese had entered the war on the side of the Allies, mostly due to skirmishes against Germany in Africa where Portugal was attempting to protect her colonies such as Angola. German U-boats whilst trying to blockade Britain had attacked Portuguese shipping whilst trying to trade with Britain, at the time Portugal’s most important export market. Germany finally declared war on Portugal in March 1916 with the resulting loss of almost 8145 Portuguese troops killed, 13,751 wounded and 12,318 taken prisoner or reported missing . However the civilian population paid a far higher price with the loss through starvation and disease of a further 220,000.

Today, at Neuve Chapelle near Richebourg, is a large Portuguese cemetery for their fallen there. 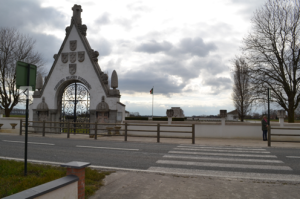 Entrance to the Portuguese cemetery at Neuve Chapelle 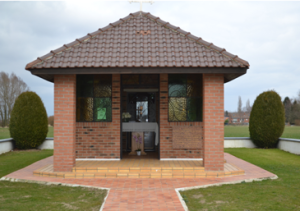 The small chapel opposite the Portuguese Cemetery