Local peace breaks out for a week

“We got back to Erquingham again on the 11th October, and had a quiet rest period which ended on the night of the 17th October.”

Although Douglas and his comrades were enjoying a restful period in their war, the scene elsewhere was less quiet, fighting around the Ypres area was as intense as at any other time.

General Price-Davies was busy along with other senior staff officers taking afternoon tea and playing badminton, wishing he was anywhere but on the Western Front. He described the scene for the area that Douglas found himself in. He mentioned the long front that had now been established to the south of Armentieres and “what a change it was to see grass and trees instead of shell swept battle front where everything is blown”.

It gives some idea of the change in the scenery, that despite the fighting continuing all along the front, there were places where it was less intense than others. Artillery had undoubtedly been concentrated further to the north to support the drive to capture the ground around Passchendaele, so maybe there were less big guns available to smash up the area around Erquinghem. The picture of remaining greenery was in stark contrast to the shattered trees and cratered mud-bath west of Ypres.

Only 2 days previously the Battle of Poelcapelle had taken place a few miles to the north. It was considered a successful defensive action by the Germans who inflicted 6957 casualties on the ANZAC troops that fought them. However, Germany suffered great loss in holding their position, sustaining 35,000 casualties.

On the 12th the first unsuccessful attack on Passchendaele was launched. Despite heavy losses on both sides, the attack faltered in the quagmire and was repulsed by the German 4th Army. Added to the bogged down troops and equipment, a breakdown in communications forced Haig to suspend the attack.

No exact date given but click here to see a photo from 1915-16 near Bois Grenier showing plenty of intact foliage. British line marked ‘O’ and the German ‘X’. (Awaiting permission for usage.) 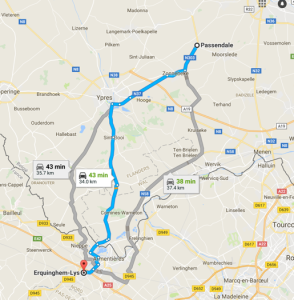