Saturday night treading the boards, but not duck boards.

Douglas once again played an active part in not only preserving the lives and health of the men, but also entertaining them. Not for the first time in his service on the Western Front he helped to produce a concert party. Previously with the 130th St. John F.A. he had been part of a concert party known as the Dominoes.

As if it was just something that one does. Not merely understated, as most of his life was, but not stated at all. Something that obviously requires a lot of planning, a lot of practice, recruitment and rehearsal, goes almost unmentioned in his diary.

Luckily for us though he does mention it and leaves a copy of a programme for posterity.

“I organised a concert for the 27th. It was a huge success, and was attended by the General and his Staff and about 40 other officers. It was billed to commence at 7.30 p.m. but by 5.30 there was a queue of ‘Tommies’ half-way down the street. Quarter-Master H Davies was in great form, and I scored a hit with a Sam Mayo item. We gave a two hours’ show.”

Sam Mayo, real name Samuel Cowan was a popular Music Hall star born in 1881. He became famous for his musical comedy act and his comic songs were very popular at the time. You can view a lot of his monologues on this popular website.

Maybe this was the number from Sam performed by Douglas, it is from 1916

It has survived across a century and the lyrics can be viewed on the above website. 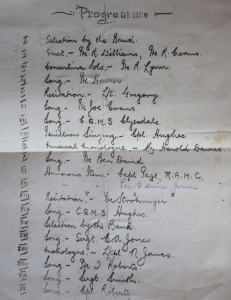 The programme (not in Douglas’s hand)