It was back to the trenches for the 13th for another six day turn of duty, giving the 16th a few days’ rest. Fortunately, for all these men things were pretty quiet again.

“ Our six days’ tour of the trenches was most uneventful. Everything was very quiet. There was practically no shelling. Aerial activity, especially on the part of the enemy was very active. I spent a lot of time in making improvements at my Aid Post, and visiting the companies in the outposts. We moved out on the 23rd being relieved by the 16th R.W.F. as usual.”

I thought that perhaps during this period of relative inactivity for Douglas Page it might be a good time to explain one of the features of this website. The Whiz-Bang or its more common spelling of Whizz-Bang. The most common array of spellings are thus Whizz-Bang, Whiz-Bang, Whizz Bang or Whiz Bang.

This was a piece of German ordnance fired from a small field gun, the 7.7cm made by Krupp. 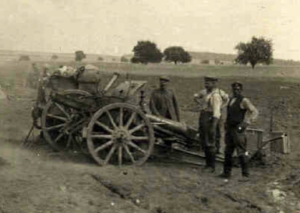 Capable of propelling a shell up to seven miles. It’s unlikely that the actual firing would be heard immediately as it could have been fired at least five miles away, but the shell arriving would have made a sudden whizzing sound followed by the bang of its explosion.

Despite its nickname sounding like a garden firework its deadly load was a fearsome and destructive weapon. Where a shell from a field gun would explode with ground contact it would normally leave a crater about 5 ft (1.5 mtr.) across and 2 ft (0.6 mtr) deep. These are rough approximate sizes not definitive crater sizes.