Straight to work for the new Colonel

“At 11 p.m. on the 7th, I established an emergency Aid Post in the orchard. The 115th Infantry had planned a large raid on the Hun trenches. They were going over 500 strong, and we (13th R.W.F) were sending out a strong fighting patrol to scupper an enemy post opposite us. I saw our men before they went over. They were a villainous-looking lot, with their faces and hands blackened, and loaded up with bombs, heavy sticks and crow-bars! The show commenced at 1.24 a.m. with a lot of trench mortar and artillery fire. Our chaps failed to get a Hun, as they found the enemy front-line unoccupied. There were no casualties, and I had nothing to do but dodge shells, as the Boche put over a lot of heavy stuff near me. I got back to Bois Grenier Dressing Station at 4 a.m., and had a short sleep there. ‘Billie’ Burke sent me back to Erquingham in a motor ambulance!”

After assuming command of the battalion, Colonel Leman (known as “Dickie”) set to work immediately. A raid on the German trenches was to take place conducted by the 115th with support from the 13th RWF. Remarkably Douglas somehow managed to preserve the battle orders for us to study one hundred years later.

Colonel John Frederick “Dickie” Leman, remained in command of the 13th until the conclusion of the war and the disbandment of the battalion in May 1919. Having been recruited to the Worcestershire Regiment in Ireland in 1906, he was posted to France as a Lieutenant following the outbreak of war in the summer of 1914. Promoted to Captain and wounded in 1915 he recovered to continue with the Worcestershire Regiment. Then due to the high mortality rate and like many others notwithstanding personal ability, he rapidly progressed until given the command as a Lt. Colonel with the 13th RWF. He went on to serve in the Worcestershire Regiment until 1935 and died at home in Dorset in 1951 aged 64. 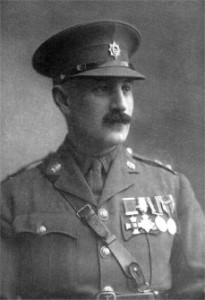 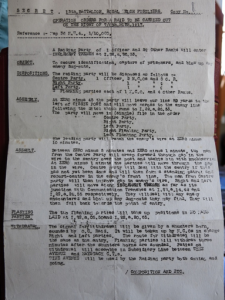 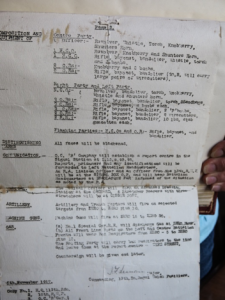 It is interesting to note that the men in the 13th RWF raiding party were carrying sticks and crowbars as well as the probable Mills Bombs. It must have come as something of a surprise to find the German front line trench was unoccupied, thereby defeating the object of taking prisoners. The normal German defensive arrangement was a front line backed up by two further defensive lines.