“The Battalion relieved the 16th R.W.F. in the line on the evening of November 10th. It was a filthy night and the roads were in a ghastly mess. Next day, as usual, I made a tour of the trenches, but went up earlier in the day than usual setting out at 6.30 a.m. – safety first! I visited all the posts. The trenches were very wet and muddy, and I had great difficulty in getting to one of the posts. I got back to H.Q. about 9.30, and had breakfast. Afterwards I toured the Support Line, visiting all the Company Headquarters. The Huns sent over a lot of ‘pip-squeaks’ (small shells fired by field guns), and chased me through the ruins of the Ferme de Biez. I increased my speed to 10 m.p.h.! Whilst I was at the left company (C Company) H.Q. a big enemy aeroplane dropped six bombs in quick succession in Cowgate. He hadn’t meant to do so, but had to as our anti-aircraft shooting was too good for him!

Our trench mortars had a ‘straffe’ in the afternoon, which the Huns promptly replied to, wounding two of our men rather badly.”

The weather over the last few days was a mixture of a murky fog and heavy rain. August 1917 had seen the introduction of the Gotha GV bombers, it was probably one of these that Douglas described as a “big enemy aeroplane”.

The misspelled farm “Ferme du Siez” which was described as a ruin must have been entirely destroyed as no trace of it exists today. 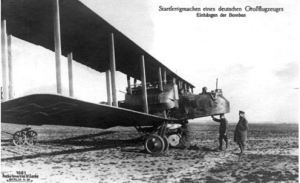 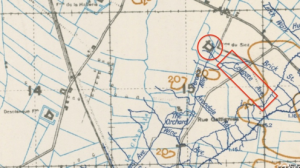 Trench map showing Cowgate Avenue and Ferme du Siez (Biez in the diary). Reproduced with the permission of the National Library of Scotland. https://maps.nls.uk/index.html 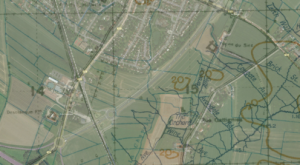 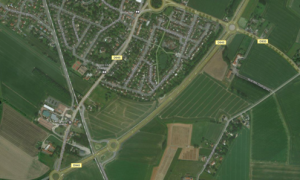