“Next day I went round all the trenches and supports examining food supplies to see that they were not tainted by the gas. There was a lot of gas hanging about in the shell holes.

About six o’clock in the evening Battalion H.Q. was heavily shelled, and one dug-out was blown in. There were four men inside at the time, and they were lucky to escape with bruises and scratches.

During the night one of our patrols from B. Company, consisting of 2 officers, and 19 other ranks was scuppered by a Hun ‘listening’ patrol inside the Bosche wire. Sgt. Black and Pte. Davies were killed, and Lt. Palmer and 5 men wounded – two very badly. It was a rotten affair, and depressed us very much. Lt. Roberts did splendidly. He killed three Huns and was untouched himself. We were badly ‘straffed’ with gas shells later.

We got back to our rest billets on Friday evening the 16th November, and had an uneventful stay in Erquinghem.”

The men killed during the raid that night were: 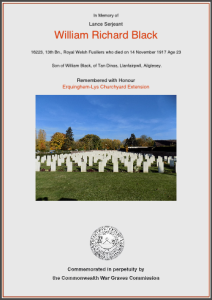 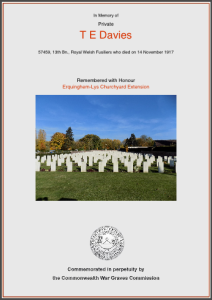 We invite any information on these men including anyone that might have photos.