A bit of a lull in action but attacked by flu

“We got back to our rest billets on Friday evening the 16th November, and had an uneventful stay in Erquinghem. We relieved the 16th R.W.F. in the trenches on 22nd November, the relief being complete before 8 p.m. I had an attack of influenza and felt rotten the whole of the time we were in the line. I spent most of the time in my ‘flea-bag’, but managed to crawl around the line twice during the six days we were in. Luckily the enemy kept quiet most of the time, so that I had little work to do.”

In 1917 there were no drugs that we rely on today to relieve the symptons of colds and flu. Influenza was in the following year to account for more deaths than the war itself. Although first discovered accidentally in 1877 Paracetamol was not used commonly in humans due to its many side effects. It wasn’t until 1949 that it was re-examined and then first manufactured in 1951. Only as late as 1959 was it first available as a common over the counter drug, without prescription.

Although it was invented in the late 19th century, Aspirin was used in different ways to treat the symptoms of fever inducing ailments, it has a mixed and interesting history which is better told in these articles https://en.wikipedia.org/wiki/History_of_aspirin.

Douglas doesn’t indicate if he actually used it himself during this period. 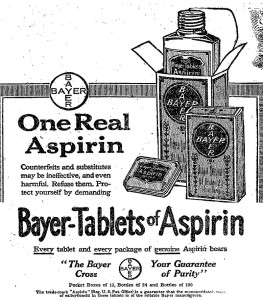