“On the night of the 10th the ‘Welsh Wails’, our new divisional concert party made their first appearance in the local cinema house. The place was packed to the door, and it was an excellent show from start to finish. There were 8 in the company, and they were very artistically got up in blue costumes, and tam-o-shanters with big red ‘toories’ on them. Lt Eric Blore, of the South Wales Borderers, was O.C., and put up a great show himself. He was a big man in London theatrical circles, and married Jessie Winter, the actress.”

It seems nothing was more popular than the concerts put on for the men whenever they could be arranged. The war had seen many of the famous male artists of stage and the fledgling movie industry absorbed into the forces. Young Eric Blore a Lieutenant in the South Wales Borderers was an actor that would later go on to find fame in Hollywood. In 1923 he made his way onto the Broadway Stage and firmly established himself as an accomplished actor. His work with Fred Astaire saw him introduced to the movie industry and he went on to appear in more than eighty films, working again with Fred Astaire and his stage partner Ginger Rogers. He would often play the part of the archetypal English butler and you can see him here with Fred Astaire, playing the butler in “The Gay Divorcee” in a movie of the stage play that got him his break. 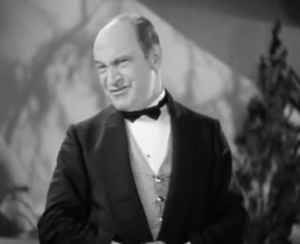 Douglas for some reason got his facts mixed here in the diary with his mentioning of Blore’s wife Jessie Winter. Eric Blore in fact was newly married at the time to Violet Winter who sadly died only two years later in 1919. They had a daughter also called Violet. He remarried in 1926.

Eric Blore died in Hollywood in 1959 aged 71, but his death wasn’t without controversy. Somewhat jumping the gun the British theatre critic Kenneth Tynan referred in the “New Yorker” to the late Eric Blore”. Blore’s lawyer angrily demanded a retraction. The New Yorker had held a proud record of never having to print a retraction as they were careful to double check all their facts and the furious editor fearing a lawsuit forced Tynan to write it, sheepishly appearing on the news stands with a full front page retraction. Blore in a seeming fit of pique then duly died anyway, so while the rest of the press appeared with news of his demise the New Yorker appeared apologising for reporting his death. Pure showmanship!