A Hurried Breakfast and Scots From The Somme

“I took over the Dressing Station at Erquinghem from the 131st Field Ambulance camp on the morning of the 29th, having got sudden orders at 8.35 a.m. to do so. It was some rush. I had a very hurried apology of a breakfast at 8.30, and nothing more till I had a ‘high’ tea at 4.30 p.m.

The 9th Royal Scots (Dandy Ninth), and Macrae’s Battalion came into the village at night. It was fine to see them again. They have just come north from Albert.”

“High Tea” was probably a hot meal and not a plate of scones and sandwiches with the crusts removed.

“The Dandy Ninth”,  so called because their uniforms based on the Hunting Stewart tartan, set them apart from other battalions of the Royal Scots. Arriving in France in February 1915 they had earned a reputation for fighting valour having been involved at High Wood on the Somme in 1916 then in 1917 at Arras and Vimy Ridge and later at Passchendaele and Cambrai.

Having come north from Albert, on the Somme where the Germans initially broke through with great success, they would go on to be instrumental in the disruption and later halting of the German advance during the Spring Offensive.

Once the Germans had been halted it was the tipping point of the war and ultimately led to the Armistice.

McCrae’s Battalion was one of Lord Kitchener’s New Army, Pal’s battalions, raised in 1914. Known as the Sportsman’s battalion it recruited predominately from professional sportsmen that included many footballers, drawn from the main clubs in Scotland.

The whole ethos of Pal’s battalions was that men would fight alongside men they knew from private life, encouraging a stronger sense of unity resulting in men watching out for each other and becoming a more determined fighting unit. In reality what happened was in many instances whole families and friends were casualties, causing in many cases almost the entire male population of some areas to be practically annihilated.

One such area was Cyprus St in London’s East End. No less than 26 young men, all from the same street gave their lives for their country. Following the decimation at the Battle of the Somme in 1916 the experiment of Pal’s brigades was discontinued. 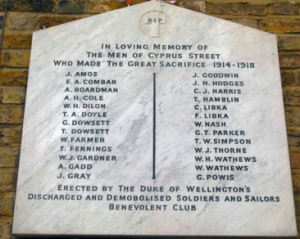 You can read more about the 9th Royal Scots here.

You can read more about the McCrae’s Battalion here.